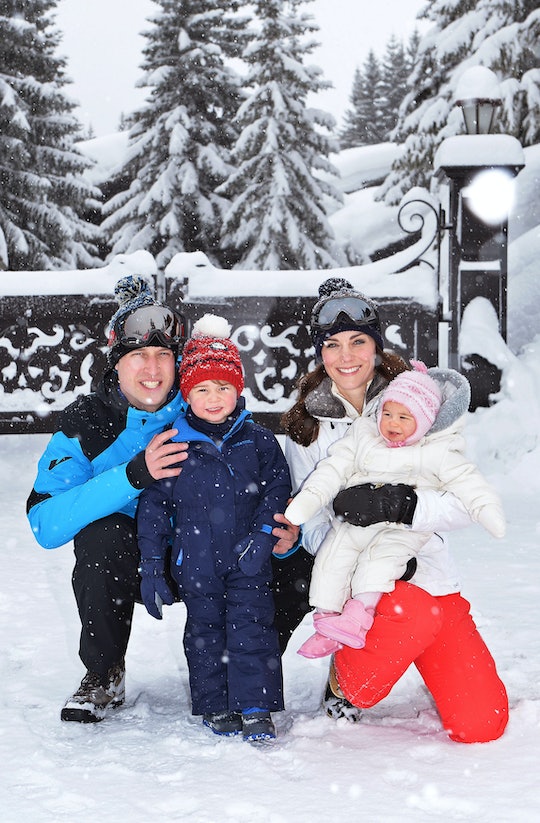 How To Get Princess Charlotte & Prince George's Snowsuits, Because #Snowgoals

Even if your clan can't live like the Royal Family, you can look like one. Prince William and Duchess Kate packed up their two kids for an early-March trip to the French Alps last week, and all of them looked lovely in their snow-worthy ensembles. Wondering how to get Princess Charlotte and Prince George's ski suits? They're actually affordable!

Kensington Palace celebrated 10-month-old Princess Charlotte and 2-year-old Prince George's first family vacation by posting photos to Instagram, according to CBS News. Duchess Kate rocked bold red pants that perfectly complimented her husband's bright blue coat (and who can resist their pom-pom hats?), but the kids might be the style standouts. In the photos, Prince George is pictured wearing a Cloud All In One Snowsuit from Mountain Warehouse, according to The Telegraph. Prince George's snowsuit is on sale for $37.99 and is available in navy or red. Whether you're jetting off to the Alps or just building a snowman in the backyard, the snowsuit is built for resilience: It's waterproof, fleece lined, and it even has reinforced knees.

Princess Charlotte is shown all smiles in a John Lewis Baby Wadded Snowsuit, The Telegraph reported. She wore it in off white, but it's also available in blue and dusky pink, and it's priced £28, or approximately $40. The snowsuit has detachable mitts and a button through front, making it simple to slip on and off. The highlight, though, has to be the adorable ears!

Want to complete the outfit? Add a hat! Prince George's hat is similar to the red Concept One Boys' Fairisle Beanie from Target. Get the look of Princess Charlotte's hat with Ralph Lauren's cotton hat & booties set in morning pink. If you're in the mood to splurge, you can get a cashmere hat & booties. Less expensive (but no less adorable) options include Gymboree's Pom-Pom Sweater Hat in petal pink and the Luvable Friends Girls Pink Cable Knit Hat, Mittens, and Booties Gift Set from Babies"R"Us.

Princess Charlotte and Prince George look like they're having a good time, and it's not a surprise: it was the first time they'd "played in the snow," according to Vanity Fair. All of the sweet family photos were taken by the Press Association's Royal Photographer John Stillwell.

Though there are few things more delightful than watching kids explore the snow, it appears as though Prince William and Duchess Kate still found time to be goofy together:

Kensington Palace thanked followers for a warm reception to the photos:

Thank you so much to everyone who posted such kind comments today. We are pleased that we can share these important family moments with you, and hope you enjoy these photographs as much as we do.

Most families don't have a professional photographer on call to capture their vacations, but at least it's possible to look as adorable as the Royal Family does. With Princess Charlotte and Prince George's snowsuits on hand, you can create your own royal snowball fight moment.