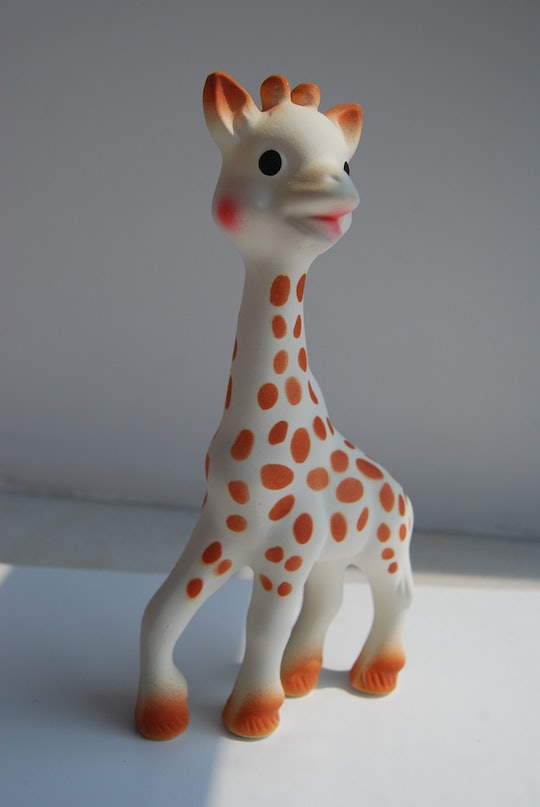 How To Get Sophie The Giraffe Cheap

Most moms panic when they see that their baby has picked up, say, a toy ball off of the floor and put it into their mouths. The thought of how many germs have infested your baby in .02 seconds is enough to pray, scream, or immediately schedule an appointment with your pediatrician — whichever you'd prefer. Well now, Sophie the Giraffe teething toy — a toy that's meant to go in your baby's mouth — is causing concern, because some parents have discovered mold inside of them. That's especially frustrating because the toy is fairly expensive. So if you'd prefer not to plunk down a lot of money for something that may develop mold inside of it, here's how to get how to get Sophie the Giraffe for cheaper than usual.

So why does it cost so much? Sophie has been French mothers go-to teething toy since 1961. The toy is made in France rather than in China, and is made with natural rubber rather than plastic. That means the product costs more to make and is relatively expensive around the globe — but that hasn't stopped its popularity.

The cheapest place to score Sophie the Giraffe is probably the most obvious one: eBay. Lots of eBay sellers have Sophie the Giraffe, including ourlittlefamilystore, who is selling the toy for $14.69 with free shipping. Make sure you check the seller's feedback so you feel comfortable that you'll be getting the legitimate product, and in good condition!

If you're not crazy about buying a toy that will basically live in your child's mouth off of eBay (and I can't blame you for that), Groupon is the cheapest place to buy a Sophie the Giraffe. You can get her for $18.99, which is 32 percent off.

Another way to save is to take advantage of coupons to buy more than one. Every once in a while, Target has a coupon for $10 off a $50 toy purchase. They sell Sophie the Giraffe for $24.99, so buy two of them (and throw in some $2 stacking rings to get your purchase over $50), and they'll end up being less than $20 a piece.

Once you do have Sophie the Giraffe, make sure you clean her properly to keep her from getting moldy. Mom and dentist Dana Chianese said she discovered mold after she cut into the toy upon noticing a strange smell, Good Housekeeping reported. You can also put hot glue over the holes that water could penetrate to keep mold from growing.

As indicated on the packaging and in an explanatory leaflet inside the packaging, we recommend to clean the surface of Sophie la Girafe with a damp cloth. It should not be immersed in the water nor rinsed off, to prevent water from getting inside, as she may become damaged. We thus would like to emphasize on the fact that is it important, while cleaning the product, that no water gets inside the whole.

A spokesperson for Callison also told Romper that the incident is "an isolated issue it's probably due to improper storage and improper care of the product."

But even if mold does develop, it's not harmful to your baby because it's inside the toy, which is a relief. So go ahead and let your baby chew on Sophie, because there are many happy parents out there who feel she's worth every penny.