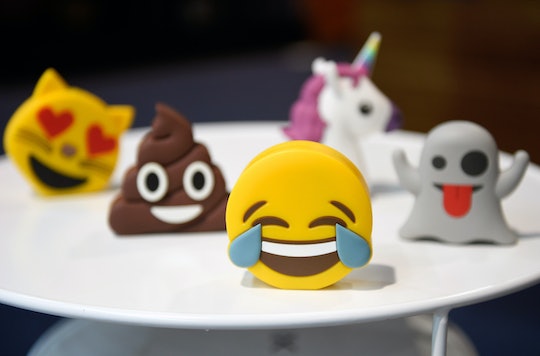 Here's How To Get The Animoji On iOS 11, So You Can Turn Your Face Into A Poop Emoji

By now, you may have heard of Animoji. Back on Sept. 12, Apple announced the iPhone 8, the iPhone 8 Plus, and the iPhone X, to much fanfare and rejoicing on the part of of Apple fanboys and fangirls everywhere. But the company also debuted its new "custom-animated messages" feature — known as Animoji — during the launch event as well. Some people seem more excited by the prospect of the Animoji than the idea of getting their hands on one of the new iPhones, but can you blame them? Using your voice and facial expressions, Animoji will transform your face into one of many beloved emoji figures. How fun is that? The question now is how to get the Animoji on iOS 11, Apple's newest operating system, to get in on the fun with everyone else.

Along with those new iPhones, Apple launched Apple TV 4K, a wireless charging pad dubbed the AirPower, and a new operating system for Mac laptops and desktops, MacOS High Sierra, at its Sept 12. launch event, according to Business Insider. But it was the iPhones and the Animoji feature that really stole the show.

Articles were dedicated to the new animated emoji, with one even clarifying that, "Yes, the new iPhone X will be able to create an animated poop emoji based on a scan of your face." Because that's what everyone really cares about, right? Expressive smiley faces, or funny pig emoji? Sure, that's cute. But it's an animated poop emoji that the people really want.

Last week, Apple released its newest mobile operating system, iOS 11, according to Digital Trends. Since then, it has also has rolled out a beta version of iOS 11.1 to developers and a public testing group, which might suggest that the company is already trying to work out a few bugs with the original version of the new operating system. But hopefully, none of those bugs involve Animoji, because it was a heavily anticipated feature that may have even led to Snapchat’s Bitmoji feature coming out with 3-D animations not long after Animoji were announced.

Apple's “Face ID” feature makes 3-D emoji messages possible, according to New York Magazine. But you can't use Face ID on the iPhone 8 or iPhone 8 Plus, according to CNET. That means that in order to get and use Animoji, you have to have an iPhone X, which does have Face ID.

The iOS 11 operating system is compatible with a ton of different Apple devices, according to Apple's page about it. From the iPhone X down to the iPhone 5s, it should work with several different iPhones. It also works with a bunch of different iPad devices, as well as the sixth generation iPod touch.

But again, not all of those devices have Face ID, which is required in order to have Animoji on your phone. So while the operating system can be used with lots of Apple products, that particular feature is only available on the iPhone X — which, as many have pointed out, is one of the pricier phones available out there.

But if you are willing to shell out for the iPhone X, the iOS 11 comes with it, according to Apple. That means a new iPhone X should be all set to use Animoji as soon as someone starts to use it — and the ability to turn yourself into a poop emoji is just a couple of steps away.

If for some reason you want the new operating system even though you've got an older device without Face ID, Apple provided a guide to updating to iOS 11 online. But it might be a good idea to wait and be sure all the kinks are sorted out first — especially if you can't get Animoji anyway and that would have been your reason to rush to get the system update.

Unfortunately, only those with an iPhone X can get the Animoji on iOS 11. Because the Animoji feature doesn't depend on software — but on Face ID and the iPhone X camera that it operates with — the new iOS 11 alone doesn't make the use of Animoji possible. Looks like everyone else will just have to use the same old poop emoji without their face on it for now.