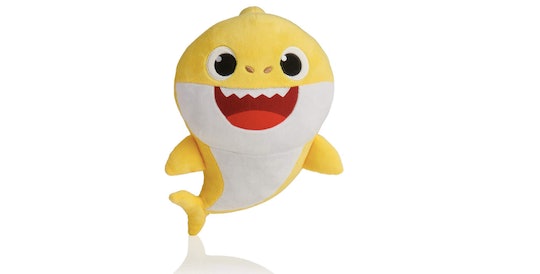 You Can Still Get The Hot Baby Shark Singing Toy, But Heads Up, It'll Cost You

The hunt for this year's most popular toy is on, and for 2018 it's all about that singing fish. Seriously, the Baby Shark toy is flying off shelves faster than anyone predicted, leaving some parents in a scramble. So knowing how to get the Baby Shark singing toy after it sold out is crucial for some families, because it's the top toy for plenty of tots this holiday season.

Based on the wildly popular YouTube video, the Pinkfong Baby Shark toys sing the "Baby Shark" song when squeezed. It's just a cute and musical plush toy, really. But because of its connection to the hyper-viral video, the Baby Shark singing toy sold out just two days after its December 1 release on Amazon, according to USA Today. Whether the next shipment will be available in time for the Christmas holidays is unknown. That said, there are still a few ways to get your hands on this super-popular toy.

First, there are some Baby Shark toys available on Amazon, thanks to the presence of resellers. But the laws of supply and demand being what they are, these fishes don't come cheap. At the time of this post, Baby Shark singing plushes are available for $90 to $200 via resellers. It isn't the cheapest option, but it's one avenue to consider if you're super desperate to catch this toy.

Really, until the next batch of sharks are released by the WowWee toy company, resellers are the only option. A Baby Shark that plays the Korean version of the song is available from Ebay for $37, and a few other retailers offer non-English versions of the plush as well. But it looks like the only way to get a Baby Shark plush that sings in English will be to pay the pretty price from Amazon resellers, or wait until the next shipment of sharks arrive.

For consolation, take another viewing of the original video. Just be warned that it's as catchy as ever, so you're going to be singing "do do do" in your head for days on end.

If you have to wait until January before the singing sharks join your family, here's what you should know. First, the battery-operated toys will retail for $17 each, and you can collect Baby, Mommy, and Daddy Shark, according to Newsday. Check back on WowWee's Pinkfong Baby Shark site for details about the second batch's release date. Operating the toys is easy, too. "You squeeze them and they sing the whole song,” said WowWee brand manager Emily Chacra in Newsday. It's worth noting that the plushes have a few parent-friendly features, too, if you're worried about hearing "Baby Shark" play nonstop for the next several months. To stop the singing at any time, just give the toy a second squeeze. If you need to remove the batteries for a few hours, then that's also an option. Keeping your own little one happy is important, but sometimes Mommy Shark and Daddy Shark just need a little peace and quiet.