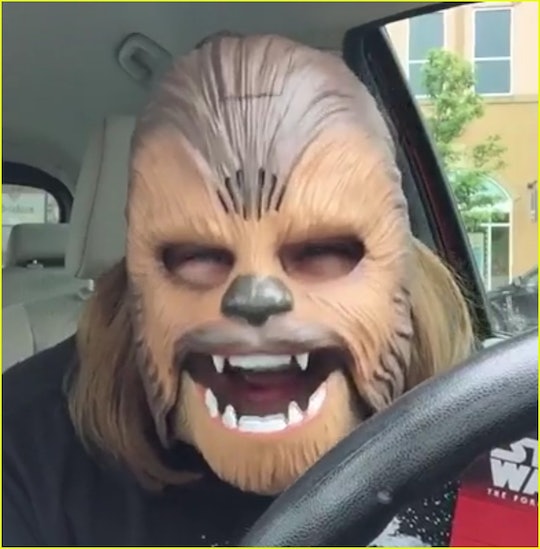 These days it is rare to see something go viral that is pure and delightful but that is what happened this week when a Texas mom’s Facebook Live video blew up on social media. Candace Payne decided to film herself in a Kohl’s parking lot trying on a Chewbacca mask she had just bought, breaking down in giggles in a video that has captured the hearts of millions. The four-minute clip is the most watched Facebook Live video of all time having been viewed more than 130 million times since it was first live-streamed on Thursday. All because a woman found an electronic Chewbacca mask so adorably amusing. If you want to inject a little joy into your life, you can get the Chewbacca mask from Candace Payne’s live video.

Yes, in a move that’s probably frustrated social media marketers, a short clip of a woman laughing hysterically at a Star Wars toy has become the most watched Facebook live video of all time. The video’s premise is so simple, it’s laughable and yet people have really connected with it. Texas mom Payne stopped by Kohl’s to do some shopping but ended up getting a little distracted in the big box store (which, let’s face it, happens to all of us) and she wound up buying an early birthday gift to herself: an electronic Chewbacca mask that makes noise when you wear it.

The mother of two noted in the video, “I’d like to say that I bought this for my son that would really, really want it.” Payne admitted that her son would be very jealous. “And let’s be honest, he’ll probably confiscate it from me… He’ll probably take it from. At the end of the day, this is mine that I bought and I’m going to keep it for my own.” You go, Candace! We are all for treat yo’ self moments and everyone could use a toy once in awhile, even for busy moms (coming from a woman who owns a dancing baby Groot for her desk).

Payne decided to share her excitement with her social media followers as she tried on her purchase for the first time. In the video, the mask makes the signature Chewbacca noise whenever the wearer opens their mouth, an obviously delightful trait. She opens her mouth to show off the mask’s power and breaks down in hysterical laughter for over a minute and half.

“That’s not me making that noise, it’s the mask!” Payne remarks. Her pure joy is endearing and her boisterous laugh infectious. It’s not hard to see how the video garnered this much attention. It is impossible to watch Payne’s video without smiling or laughing yourself, even if you are simultaneously wondering why everyone is obsessed with it (besides Chewbacca's obvious appeal).

The video is so popular, the Chewbacca mask has sold out from several major toy stores since it was published on Thursday.

“We have received an overwhelming amount of interest in the Star Wars: Episode VII The Force Awakens Chewbacca Mask by Hasbro since Candace posted her funny and lighthearted video,” a Kohl’s spokesperson told CNBC. “The mask is currently sold out on Kohls.com.”

The electronic mask has been on shelves since the end of last year when the new Star Wars movie, The Force Awakens, was released. So, it may come as a shock to Hasbro and retailers that the toy is now flying off shelves. The Chewbacca is out of stock at popular retailers like Target, Wal-mart and ToysRUs. A spokesperson for ToysRUs told CNBC, “In the last day or so, we’ve seen popularity of [the mask] increase tremendously among our consumers both in-store and online.”

So where can you get the mask that brought an adult woman to tears from laughter? You can buy the mask from alternative sellers on Amazon for a big mark-up, $165, but as Payne says in her video, “this is worth every penny.” Although she bought hers for $24.99, so take that with a grain of salt.

Unfortunately, for those unwilling to shell out the big bucks for the Chewbacca mask, there isn’t a way to purchase the mask online at the moment. But fear not, I’m sure Hasbro will be manufacturing and sending out newer version after seeing the recent spike in demand for the Star Wars mask.

Payne is so genuinely happy about a children’s toy when everything on the Internet can feel so sarcastic and dark, it’s refreshing. As Payne captioned the video, “It’s the simple joys in life.” For us, that simple joy is watching a viral video that is funny without taking pot shots at some one else’s expense.