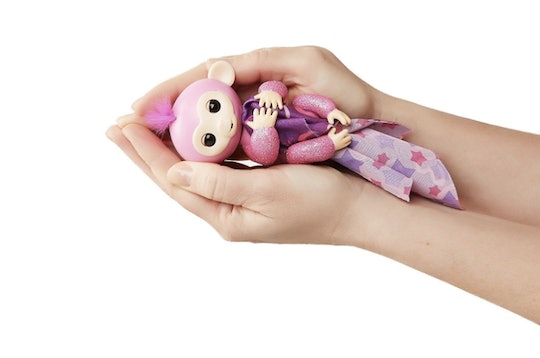 Here's How To Get The Adorable Glitter Fingerling

Every year, there's some random new toy that takes over schools and playgrounds, captivating kids and driving parents into an insane hunt to get said toy before it sells out for the holiday season. A parent's work is never done, right? This year, that hot toy is the Fingerlings robot monkeys. And the hottest of them all are the the glitter monkeys. So how can you get the Glitter Fingerlings without also wanting to pull your own hair out?

Luckily, it's not all that hard. Sort of. The Glitter Finglerlings come in pink, white, blue, purple, and turquoise, and you can get them exclusively through Amazon through starting on Nov. 20, according to Lady Savings. Which is sort of a pain, since you're going to have to pay about $5 for shipping on top of their retail price, which ranges from $22 to $29. The normal Fingerlings retail for $14.99 at Toys "R" Us, so you are definitely paying a premium for the sparkle.

The Glitter Fingerlings also come with a blanket, which is a kind of adorable accessory. If that's not enough accessory for you, you can also buy a playground set just for your little monkeys to hang on when you take them off of your finger. Adorable.

These things are ridiculous, but they also look like a lot of fun. They're simply interactive dolls that you can put on your hands and make do silly things. Like, tap one on its head for it to make a bunch of noises.

And you're definitely going to want to get that jungle gym for them, since when you hang them upside down, they laugh "hysterically," according to WowWee. "These little babies are monkeys after all, and they love nothing more than hanging by their tails," the toy company explains on its website.

There's more, too — the monkeys even fart. "Yep, baby monkeys do that too! Just cup your hand on top of their heads to see — or hear! — what happens. Then try the same thing when they’re upside down to trigger a different bodily reaction," WowWee explains.

You can also blow kisses at them and they'll blow one back. Yes, by January you'll want to throw the farting baby monkey out of the car window, but for the immediate future, they're pretty fun toys.

Although these toys seem readily available at the moment — or at least backordered for a reasonable amount of time — that will not be the case for very long. So if you think your kids might jump on the bandwagon in a week or so, stock up while you can. They're inexpensive enough to begin with and if you end up not needing them as stocking stuffers in December, you can likely resell them on eBay or somewhere later on. These are the Hatchimals of 2017.

Juli Lennett, toy industry analyst at NPD Group told TIME Money, "It’s brand new this year and it seems to be flying off the shelves. I think that could potentially be one of the top toys for the holiday season." It has basically everything a hit toy needs to be. It could eventually be collectible since there are so many of them. And the "play value" is strong, according to Lennett.

Also, kids love to play caregiver. "Pets and that nurturing play really seem to stand the test of time. Toymakers can make these things even more lifelike," Adrienne Appell, director of strategic communications at The Toy Association told TIME. Fingerlings like, Hatchimals, or even the Beanie Babies and Tamagotchi's from back in the day, have all of these addictive features.

If you've learned anything from holiday seasons past, you'll want to order your Glitter Fingerlings as soon as you can.