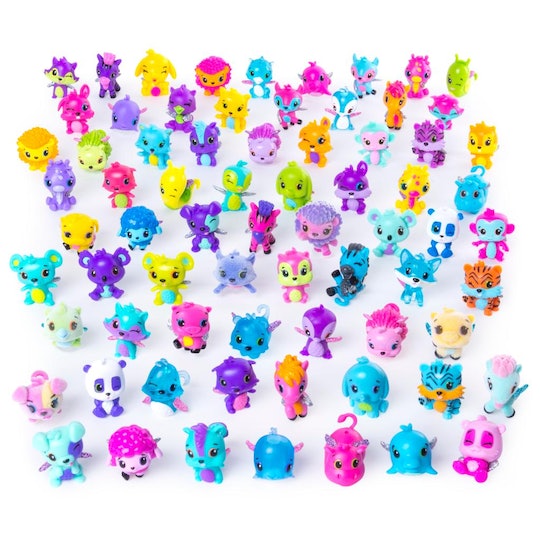 How To Get The Hatchimals CollEGGtibles Before The Holiday Sell-Out

Halloween's not even here yet, but it's never too early to start hunting down the hottest holiday toys, because it could mean the difference between having a peaceful holiday season, or getting in a Walmart fistfight on Christmas Eve. It's all a matter of finding out how to get the Hatchimals CollEGGtibles, because regular Hatchimals are so 2016. By now, that glorified Furby that cost you $300 on eBay last year is probably lying forgotten in some dusty corner of the playroom, but lucky for you, SpinMaster came up with a new twist on their wildly popular egg-clad products.

If you'll recall, the main draw for Hatchimals was, as the name implies, that they hatch from an egg. That's clearly the best part of the Hatchimal experience, but unfortunately, kids only get to do it once. No way are you shelling out another $60 just for 15 minutes of fun. There's also Hatchimals Surprise, which is a giant egg with twin Hatchimals inside, but that completely misses the point; that version actually robs children of a potential second hatching. And you can only convince them to "hatch" so many hard-boiled eggs before they start getting wise, so there's got to be a better solution.

And there is! Hatchimals CollEGGtibles is an affordable alternative to regular Hatchimals, filled with tiny, disposable creatures. I mean, don't call them that in front of your kid, because they're totally going to try to collect all of them (there are over 70 varieties in Season 1 alone), but kids tend to lose things, and they're really small Plus, if you ask me, you're perfectly justified in tossing anything that poses a choking hazard for your younger kids, as well as a destroying-Mom's-feet hazard, should you step on one in the dark. Besides, like I said, they really only care about hatching them; they probably won't even notice they're gone.

Hatchimals CollEGGtibles are sold as singles for $2.99. You can also get a two-pack with a nest for $5.99, or a "four-pack with bonus" for around $10. Be warned, though, that the "bonus" is actually a fifth Hatchimal, sans egg, which sounds a lot like Spinmaster ran out of eggs and tried to pass off their useless extra parts on the consumer as a treat, but what do I know? Each Hatchimal has a pair of glittery wings, so even after they mysteriously disappear from your home, you'll always have something to remember them by, because that glitter will no doubt be stuck to someone's face or arm forever.

Hatchimals CollEGGtibles amps up the hatching fun, too, by adding a color changing heart that turns from purple to pink when you rub it, indicating that it's "ready" to hatch, although the how-to video explains that sometimes it won't change color, which is fine, and if you accidentally crack the egg without rubbing the heart, that's OK, too. Basically, the heart is pointless, but it'll keep the kids busy for an extra minute or two. The colored speckles on the egg offer a sneak peek into what "family" the animal inside comes from, and by that, they mean "neighborhood." Helpfully included in multi-packs is a map of Hatchtopia, along with a checklist so your child will know how many Hatchimals CollEGGtibles they don't yet own (recycle that immediately).

Wanna spend even more money? Of course you do! You can also purchase an egg carton filled with 12 Hatchimals CollEGGtibles (two are already hatched, WTF), or a Hatchery Nursery playset, featuring swings, a slide, and a tree that kind of hatches the eggs for you, but not really. Those will run you about $25 each, but be warned, the playset boasts accommodations for up to 35 Hatchimals, so only buy it for your frenemies' kids. The best part: they're all currently in stock at Toys R Us, at Target (use your Red Card for free shipping) or direct from Spinmaster. You can even get them on Amazon Prime, and have them in two days. Don't wait until the weather turns cold, and shoppers turn ugly. Stock up now, and with any luck, your kids will be entertained throughout winter break. Just watch where you step.