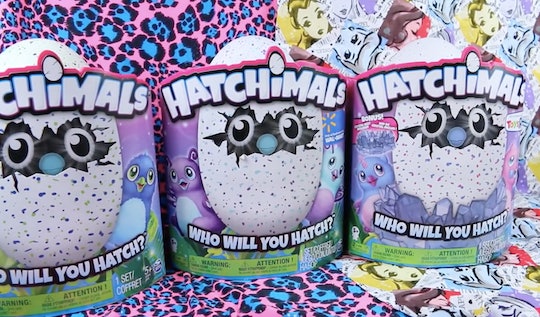 A New Hatchimals Toy Exists & It'll Be Double The Trouble, But Twice The Fun

As your children have probably already drilled into your mind, new Hatchimals are coming out just in time for the holiday season. Now that the newest editions have been announced, you may be wondering how to get the Hatchimals Surprise. As popular as these toys are, pre-ordering or app-tracking are probably your best bets to snag one before they sell out.

The second annual Hatchimals Day is scheduled for Friday, Oct. 6 — when the the new species were set to be announced — but news of the special Hatchimals Surprise is already out. According to I4U News, Spin Master released the much coveted information of the new Hatchimals Surprise slightly ahead of schedule. The full list of new reveals includes Zuffin, Peacat, Giraven, Ligull, and Puppadee.

Spin Master's latest suprise contains — wait for it — twins! That's right, two toys for the price of one, coming out of a single egg. The twins will work in unison, making for a greater play experience for your child. While one repeats phrases, the other will dance and play. If the two of them are facing one another, they are capable of playing and interacting together.

If you want to have a Hatchimals Surprise for your little ones this holiday season, it is wise to pre-order them, as they flew off the shelves last year. The $69.99 2017 Hatchimals are available for pre-order as of Sept. 18, and you can get yours at Target, Toys "R" Us, and Walmart, according to TIME. It is notable, however, that some creatures are only available to specific stores, such as Zuffin, a Walmart exclusive.

Unfortunately, even pre-ordering may not be enough to beat the crowds rushing to get their hands on the latest critters. I4U News reported on Monday that most of the Hatchimals pre-order inventory was already sold out, but there are still ways to get your hands on this hot trend. There are a number of websites devoted to tracking the toys, as well as a tracker app from I4U available for download, which has reportedly found Hatchimals Surprise toys for sale since pre-orders opened.

According to Pop Sugar, the first twin that comes out of the egg will be a big talker — repeating phrases your child says to it. The younger Hatchimals twin will be more interested in busting a move than having a chat — it will dance and play games with your child. If you position the two twins so they are facing one another, they will play games, have dance parties, and giggle, among other things. Similar to the earlier models of Hatchimals toys, the twins will grow from babies to toddlers, and finally to kids, learning new skills and fun games as they grow.

There is more good news for parents with the Hatchimals Surprise lot. Unlike the 2016 Hatchimals that took an excruciatingly long time to hatch (in kid time, anyway), the new surprise eggs will speed things up a bit. Pop Sugar reports that they will begin to show the creature hidden inside as early as seven minutes after the beginning of the hatch — a much more manageable timeframe for inpatient little ones.

Hatchimals continue to be as popular as they were last season and are expected to do very well this year as well. James Martin, senior vice president, robotics at Spin Master, told Pop Sugar as much:

We saw millions of successful hatches around the world last year, delivering a magical hatching experience for kids and their families. With the launch of Hatchimals Surprise, we are delivering everything the original Hatchimals did and more. The early response has been incredible, and we're excited to celebrate our second annual Hatchimals Day.

So, there you have it folks. Hatchimals are back to rule the holidays yet again. If you are willing to fight the hoards of parents out to get their hands on these twins, it is possible to track down the latest Hatchimals Surprise. It will just take some digging.