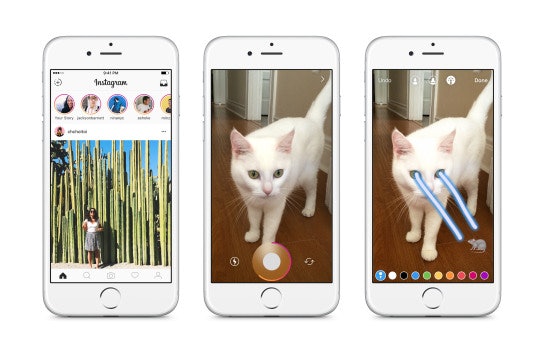 How To Get The Instagram Stories Update On Your Phone

Earlier today, Instagram announced the latest change to the nearly 6-year-old platform, and that change is “stories,” a secondary feed where users can post as many images and videos as they want in order to tell their daily “story.” However, unlike other Instagram images, photos and videos that are designated as part of your story will only be viewable for 24 hours. The feature is similar to Snapchat’s “stories” (you can add graphics and text, too), and Instagram is hoping that — like Snapchat — the addition of this feature will encourage users to post more frequently. But how can you get the Instagram stories update on your phone?

Unfortunately, not everyone will be able to get it immediately, but according to the company’s website, “Instagram Stories will be rolling out globally over the next few weeks.” But you can repeatedly update your Instagram app through whatever application store you use until you see the update. (And trust me; I tried to update the app on my iPhone. Nothing new yet.) However, Instagram has given us good idea what we can expect:

You’ll see stories from people you follow in a bar at the top of your [general] feed....[w]hen there’s something new to see, their profile photo will have a colorful ring around it. To view someone’s story, just tap on their profile photo. It’s easy to view stories at your own pace: tap to go back and forward or swipe to jump to another person’s story. If you want to comment on something you see, you can tap and send a private message to that person on Instagram Direct [because] unlike regular posts, there are no likes or public comments.

As for creating your own Instagram story, according to Vox, this process is just as simple: all you will need to do is tap the new stylized "+" icon, located in the top left-hand corner of the screen, to reveal the story camera. (The camera can also be accessed by swiping left.) Once you’ve taken a story video or image, you can draw on it, add text, or add stock images.

When Vox interviewed Kevin Systrom, Instagram’s co-founder and CEO, about “stories,” Systrom acknowledged Snapchat truly pioneered the “stories” format — and Instagram was heavily influenced by the rival company — but she insisted “stories” were (and are) bound to surface in other apps:

You’re going to see stories pop up in other networks over time, because it’s one of the best ways to show visual information in chronological order.

Systrom also explained Instagram’s reasoning for adding “stories” had more do with their own shortcomings than with Snapchat:

If Instagram[‘s general feed] is built around highlights [i.e. glamorous and artfully-posed images] we’re filling in the space in between — and becoming more about visual expression in general. We’re capturing all the world’s moments, not just the best ones.

People feel like there are all these rules in main feed. Now we get to experiment with a bunch of different creativity in this new format that I think people are pretty hungry for.

Regardless of why “stories” was created, one thing is clear: the “stories” feed is bound to change the way many users interact with the photo-sharing platform.