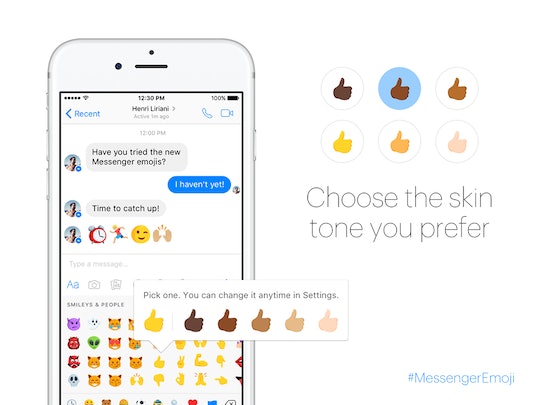 How To Get The New Facebook Emoji, Because They're Cute & More Inclusive

Recently Facebook announced that it would be releasing a new installment of emojis for its Messenger app. Its aim was to make emojis "more representative of the world we live in," according to Facebook's announcement post. The new set, which includes "gender-agnostic" options, different skin tones, women, and redheads, became available on June 2. If you're wondering how to get the new Facebook emoji, wonder no more: you'll be messaging with them in no time.

According to Facebook, its new emoji are trying to solve more than one issue. First, it wanted to expand representation in the available emojis. The social network designed this new set to let users set the skin tone they want to use (or change it at any time). Facebook also wanted to show more gender diversity. The new emoji include women in more roles, like a woman police officer, surfer, runner, pedestrian, and many more.

But, Facebook also wanted to fix a problem that has long plagued Facebook Messenger. If you've ever seen blank squares instead of the emojis you were expecting, you're already very familiar with this issue. Before, if you were trying to communicate with someone on another platform, be it iOS, Android, or something else, you may have experienced issues or seen inconsistencies with the way emojis look. This upgrade remedies that longstanding problem by standardizing the emoji language and making one set of emojis for everyone, no matter what kind of device you're on.

That's not all that's new. Facebook also added a Messenger emoji picker so that finding the perfect emoji is easy. When you open a Messenger "compose" window, you'll see the emoji icon on the bottom left (it's a simple smiley face). If you click on it, you'll be presented with some categories: happy, sad, celebrating, working, angry, in love, eating, active, sleepy, and confused (seems to sum up the range of human experience...). Choosing one of these categories will take you to a whole new world of emojis to choose from.

The way you get them is simple. An update is now available for the Messenger app across all platforms. Once you update your app, the new emoji set will be immediately available to use. Hopefully the emojis' cross-platform capabilities minimize the possibility for misunderstanding (who hasn't wondered, "are those tears of joy or tears of desolation?") and open up new opportunities for communication.

So far, they've been well received, minus a small contingent of users who really miss the old images (according to Wired, changes to the poop emoji garnered some understandable pushback). The best thing to do is update and see for yourself. Hopefully more apps follow Facebook's lead in moving towards inclusivity and more diverse representation in tech.