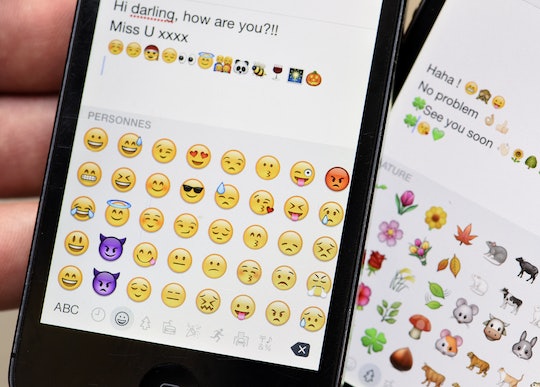 How To Get The Old Facebook Emojis Back, In Case You're Not Feeling The Latest Update

Everybody loves a conversation sprinkled with plenty of emojis to fully communicate a message that punctuation simply can’t achieve on its own. Last Thursday, Facebook upped their emoji game to better represent its diverse user-base with your choice or skin tone and gender (all of which appear in the messaging app once it’s been updated with the most recent patch). If you love it, all you have to do is update your app if it hasn't automatically done so already. However, while the change has been mostly been accepted with open arms, some are already annoyed or bothered by the update. If you hate it and liked the original selection as it was, no worries because there's a simple way to figure out how to get the old Facebook emojis back.

The ethnically and gender diverse change to emojis hasn’t been the target of criticism. Rather, the bulk of it has been more aimed at the emojis' appearance. People have been venting on social media that they are mostly unhappy with how the new characters look, appearing to look like Android emojis rather than those of the iPhone. Since the update, users of the messaging app have asked and demanded for Facebook to provide an option to swap the new emojis out for the old ones. Facebook responded accordingly.

You can now turn off the new emojis in Facebook Messenger on both iOS and Android devices, but do note that there isn’t an option to do so on your desktop or laptop just yet.

The process to turn off the emojis should work for both operating systems, but Android users have reported not being able to do so. But, Facebook developers are on it and will release a fix to the bug soon.

If you’re not a fan of the update, here’s how to disable the new Facebook Messenger emojis, according to the network's tech-heads:

Pretty simple. And just in case Facebook updates the style of the emojis again in the future, the process to turn enable and disable will likely stay the same. Even though people have had mixed feelings about the update, the sentiment and purpose behind the change is very exciting and an all-around good idea moving forward in the world of social media, and having the flexibility to choose one or the other just makes the move so much better.

It’s good to know that if you wanted to convey a message with a female police officer, pedestrian, swimmer, or surfer the option is out there. "Messenger is beginning to make emojis more representative of the world we live in," Facebook Messenger wrote in an announcement last week.

So keep the new emojis or don't. It's all up to you.