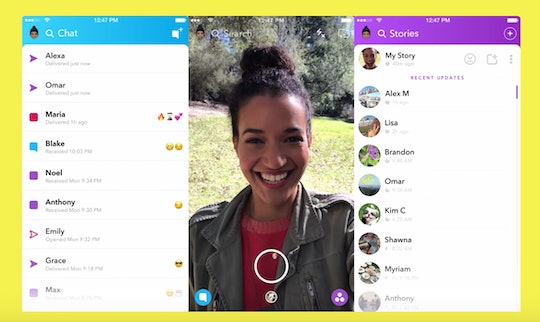 How To Get The Old Snapchat, If You’re Not Feeling The Update

It's a well known fact that technology changes (imagine if everyone was still using the first iPhone — yikes) but sometimes it feels like a personal insult when your favorite apps change and ruin a perfectly good thing. Case in point — Snapchat's new update, which isn't making a lot of people happy (including Snapchat queen, Kylie Jenner). Luckily for them (and maybe Kylie herself), there are some steps they can take to get the old Snapchat, if the update just isn't working out or isn't what they wanted.

Snapchat users were surprised this week when they woke up to find that their app had been automatically updated and everything had changed. People are upset that there is no longer a "Stories" tab, according to the Telegraph, and instead, users stories show up in the same feed where their friends are. It's as confusing in real life as it sounds on paper. So, it really shouldn't be a surprise that over 85,000 people have signed a petition to get the app to revert back to its old form, according to Mirror.

But in the mean time, until Snapchat listens to users, there is a way to get the old Snapchat back, according to Lifehacker, and it involves deleting the app altogether (although it's just for a little bit). Twitter user Clare James detailed the steps in one very specific Twitter post. Users must delete the app, turn off automatic updates in the app store, re-download Snapchat onto their phones, and essentially reset their accounts, according to the instructions.

If your Snapchat has not yet updated, consider yourself to be one of the chosen ones and turn off automatic updating in your app store immediately. This way, you can refuse to allow Snapchat to update now, or in the future, and keep it the way you know and love forever.

But if all of this doesn't work for you, you might just be out of luck. Over on Twitter, Snapchat has been adamant that the app's new update is sticking around for good. "It's not possible to revert to a previous version of Snapchat," Snapchat said on Twitter. "But we're happy to answer any questions you have about the new layout."

But while this answer is honest and transparent, it's not the answer that people were looking for — including your favorite celebrities. On Friday, Chrissy Teigen also stated that she, too, doesn't like the new Snapchat update because it now makes things feel impersonal, according to Mashable. "How many people have to hate an update for it to be reconsidered?" Teigen asked on Twitter. If there is anyone to get the app changed back to its old ways, its Teigen, who really got Panera to change the name of their broccoli cheddar soup, just for her. That woman can move mountains.

And, as previously stated, Kylie Jenner — who was named the most viewed Snapchat user in 2015, according to Elle — has also expressed her uncertainty over the new update, telling fans on Twitter that she "doesn't know how to feel about it." Same Kylie, same.

But if Snapchat isn't going to revert back to its old ways, even with the pushback from basically every user (including the all powerful Teigen), and turning off automatic updates doesn't work — the least people can do is learn to use it. Snapchat's new update, "separates social from the media" allowing users to communicate with friends more effectively and watching the content from their favorite celebrities, separately. Before this, according to Snapchat, the app forced some people to "perform" for their friends, rather than using Snapchat to express themselves.

The new update still allows you to view the stories of all of your friends (but now they're just on the landing page of the app) and lets you peek inside the very exciting lives of your favorite celebrities, like Kim Kardashian. But if you just can't seem to figure out your way around Snapchat's new update, there is always Instagram Stories, which is pretty similar to Snapchat, just without the annoying new update.