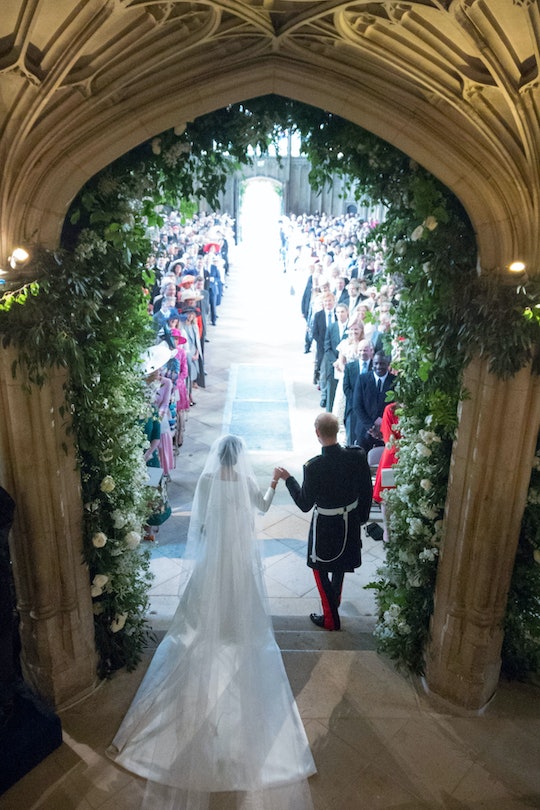 One of the highlights from today's royal wedding ceremony was the Kingdom Choir performing a transcendent rendition of "Stand by Me." It was beautiful, it was heartwarming, and it was the perfect song to usher in Prince Harry and Meghan Markle's new beginning. Wondering how to get the royal wedding's version of "Stand by Me"? You're not the only one.

More Like This
The Queen & More Members Of The Royal Family Shared Sweet Posts On Archie’s Birthday
Exclusive: Teen Artist Tyler Gordon Reveals The “Ultimate Hero” He Wants To Paint
Attorneys General In Nearly Every State Oppose Facebook’s “Instagram For Kids” Plan
Everything You Need To Know About Prince Harry & Oprah Winfrey’s Series

The classic song was originally performed by American singer-songwriter Ben E. King, but it has been covered by more than 400 artists, according to Time. But today's powerful performance, led by Karen Gibson, will go down in history as being one of the best of all time. The notes soared through St. George's Chapel and brought people the world over to tears. While it certainly is a romantic song, it resonates on a deeper level for many. The song is linked to the civil rights movement and has become an anthem for political progress. For that reason, the royal couple's choice to include "Stand by Me" in their ceremony seems even more poignant.

While the Kingdom Choir version of the song has yet to be released on iTunes, you can watch it on repeat on YouTube for now!

So what do we know about the Kingdom Choir and its conductor Karen Gibson? The mega-talented group, consisting of 20 musicians from the area of South East England, has played nationally and internationally for more than 20 years. One of their most notable performances was a loving tribute to Nelson Mandela, performed alongside Joan Armatrading, according to the group's website.

If you're hooked on the Kingdom Choir's uplifting sound, you can listen to their music on their official site, or on Karen Gibson's YouTube channel. Gibson, the group's founder, spoke about performing during the royal ceremony in an interview with The Sun, "It will be a moment that we will always treasure, and we’d like to take the opportunity to wish the couple all the very best for their coming union."

The Kingdom Choir's joyful performance of "Stand by Me" during the royal wedding ceremony certainly won them a huge new fan base. Twitter was abuzz with comments about the group's soulfulness. In fact, people could hardly believe that an all-black choir was performing at the wedding at all, with some people calling it a gloriously subversive act.

Those lucky enough to be part of the large crowds gathered on the Windsor grounds for the special occasion were seen singing right along with the choir.

The biggest takeaway from the Kingdom Choir's performance was the sense of love and solidarity they infused into the royal wedding ceremony, and, really, the entire day. And since Meghan Markle, the American daughter of a black woman and a white man, is now officially the Duchess of Sussex, it does seem to be heralding in a new era for the royal family.

"Markle’s marriage to Prince Harry represents a more inclusive royal family," said Anna Whitelocke, royal expert and director of the London Centre for Public History and Heritage, in an interview with Time.

Many peopled tuned in to watch the royal ceremony today expecting a stuffy, traditional affair, but the new Duke and Duchess of Sussex delivered anything but. With an inspired sermon by African American Michael Curry, the Bishop and Primate of the Episcopal Church of America, an insanely good cello performance by Sheku Kanneh-Mason, and of course the Kingdom Choir's rendition of "Stand by Me," the ceremony felt wonderfully inclusive and progressive.

Now we just need to wait and see what other awesomeness the newlyweds bring to the world in the weeks and years to come.