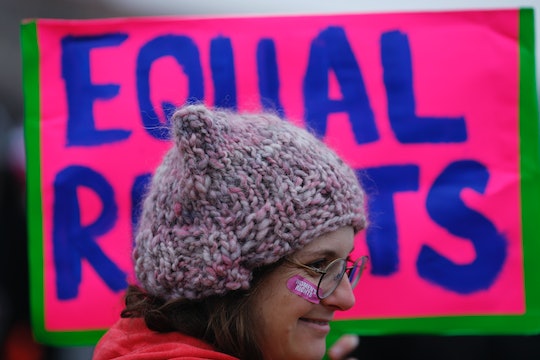 How to Get The Women's March Anthem By MILCK

If you haven't heard of singer-songwriter MILCK yet, get ready. She's written and performed what's being called the Women's March "anthem" and it's a gorgeous, power ballad titled "Quiet" that seems to have captured the spirit of the moment. Here's how to get the Women's March anthem, a women's rights rallying cry for the 21st Century, so you can play it on repeat for the next four years.

"Quiet" was performed by a group of women at the March, led by MILCK, who had never met before, and had only rehearsed the song over Skype, according to BuzzFeed. "Everyone was scattered, so I couldn’t really control it, all I could do is give the music I wrote and recordings to each girl,” MILCK told BuzzFeed. “At the end of the day, all I could do is relinquish control and trust people.”

The performance was caught on camera by chance, and once it hit social media, it really resonated with people. “I started filming and I was just standing there crying, I couldn’t stop,” Alma Har'el, a director from Los Angeles who captured and posted the video on Facebook told BuzzFeed. She posted the video on Facebook just before boarding a flight. Once she landed, the video had already been viewed more than 30,000 times, BuzzFeed reported. Her tweet of the video has already been shared nearly 66,000 times.

The video has also inspired it's own hashtag, promoted by MILCK in the video, #ICantKeepQuiet.

Here's the official video for "Quiet" from MILCK:

And here's just a sample of the powerful song's lyrics to give you an idea of how perfectly the song sums up the spirit of the March:

But no one knows me no one ever will if I don’t say something, if I just lie still Would I be that monster, scare them all away If I let the-em hear what I have to say...I can’t keep quiet, no oh oh oh oh oh oh

"It's amazing! I want a recording!" one commenter wrote on Twitter. And there's good news for her and the many other people who have just fallen in love with "Quiet" over the past 24 hours, because you can buy a copy of your very own. Download a copy of "Quiet" from MILCK's own site for just $1, or better yet, get her whole digital album for just $3.

"I first heard the song Quiet when a friend shared it to Facebook via The Women's March," a commenter wrote on MILCK's site. "And I couldn't help but think that no matter how you feel about the current political climate, this song is timeless."

Looks like MILCK and her new song are going to be the anthem women need to remind them of that day when millions of women came together and stood up for women's rights. It's amazing what a few strangers coming together to sing a song can do.