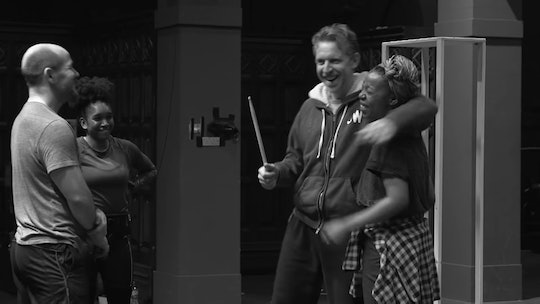 I have a confession. I’ve been going through serious HP withdrawal. I’ve tried everything, a Hunger Games injection, some Divergent pills, but nothing works. If you’ve been suffering as I have from a lack of magic in your life, never fear. Harry Potter is back in a brand new play, Harry Potter and the Cursed Child. J.K. Rowling has gifted Potter-heads with the sequel we never thought we’d get; The boy who lived is now middle aged. Unfortunately, not every one is as excited about the eighth story in the Harry Potter saga. There has been a ridiculous back lash because the director cast Noma Dumezweni, a black woman, as lead character and all around bad-ass Hermione Granger. Rowling in turn took it upon herself to slam the haters and give the casting, and the whole production, her magical stamp of approval. If you're looking to support diverse casting and Rowling at the same time, you're probably wondering how to get tickets to see Harry Potter and the Cursed Child at this point. But, buyers be warned: They come with a hefty price tag.

Harry Potter and the Cursed Child is one of the most eagerly anticipated West End productions of the season. It broke records by selling 175,000 tickets in 24 hours. The play comes in two parts and is set 19 years after the Battle of Hogwarts from the last film. Although tickets are technically sold out, the Palace Theater releases a set of forty tickets for purchase every Friday, so check out the production's twitter page for when they become available.

Tickets for both parts of the Harry Potter Play have been selling out at fast as they’ve been put online, with some websites raising prices up to £800 each, according to The Daily Mail. If you are lucky enough to score tickets, first off: Are you, yourself, a wizard or witch? Second, everyone else in the world and I are very jealous, it looks like it is going to be an amazing show.

This past week, The Palace Theater in London’s West End released a series of photos from the upcoming Harry Potter play, Harry Potter and the Cursed Child. The play stars Jamie Parker, Paul Thornley, and Noma Dumezweni as the middle-aged Harry Potter, Ron Weasley, and Hermione Granger respectively. While most ardent Potter-heads are ridiculously excited to receive any scrap of information about the mysterious production, some took issue with the cast photos, specifically with Dumezweni’s appearance. You see, as a non-white actress, many think Dumezweni is unfit to play Hermione Granger, the beloved girl genius and powerful witch best friend of the titular Harry Potter.

The controversy is, to quote Hagrid, a load of hog wash! Rowling, creator of Harry Potter and Cursed Child’s writer, has been supportive of Dumezweni’s casting since day one.

Still, many expressed outrage at the fact that Dumezweni is “ruining their childhood” by playing Hermione, a character they always envisioned as white. Well, in an interview with the Observer this week, Rowling sent a message to the “idiots” on the Internet who took issue with a black actress playing a grown-up Hermione. “With my experience of social media, I thought that idiots were going to idiot," she said. "But what can you say? That’s the way the world is. Noma was chosen because she was the best actress for the job.”

Rowling told the paper that the negative reaction frustrated her, denouncing the haters as “a bunch of racists.” Although a majority of fans responded with positivity, Rowling said,

I had a bunch of racists telling me that because Hermione ‘turned white’—that is, lost color from her face after a shock—that she must be a white woman, which I have a great difficulty with. But I decided not to get too agitated about it and simply state quite firmly that Hermione can be a black woman with my absolute blessing and enthusiasm.

It isn’t the first time Rowling has pointed out that there is no reason why Hermione should only be played by a white woman. Although she was played by Emma Watson, a white actress, in the films, the books don’t mention the character’s race or skin color explicitly. In Rowling’s own words, Harry Potter “canon” states that Hermione has “brown eyes, frizzy hair and [is] very clever. White skin never specified.” In fact, many fans portray the character as black in internet fan art.

Hermione O.G., Watson, gave Dumezweni her blessing to take over a role she had played for almost 11 years. “Can’t wait to see Noma Dumezweni as Hermione on stage this year,” she tweeted followed by a dozen heart emojis.

Cursed Child director John Tiffany, who cast Dumezweni, was struck by the internet’s “dark side.” “What shocked me,” he told The Observer, “was the way people couldn’t visualize a non-white person as the hero of a story.” He has a point. When popular movie characters come to the big screen or, in this case, the stage, certain fans can bristle when they don’t fulfill fans’ imaginations.

A similarly racist occurrence happened in 2012 after the first Hunger Games film hit theaters. A group of “fans”—I used air quotes because I don’t think they could call themselves that—took issue with Rue being a played by black actress Amandla Stenberg. “Why does Rue have to be black,” asked one ignorant Twitter user, whose profile has since been deleted. “Not gonna lie, kinda ruined the movie.” Another wanted all of Twitter to know “for the record,” that she was “still pissed that rue is black. Like you think she might have mentioned that…?” Except, Suzanne Collins did. The only difference between this outbreak of racism and the Hermione controversy is that in this case the books specifically state that Rue has “dark brown skin and eyes.”

Still, certain audience members were angry to see a black Rue when she was supposed to remind the main character Katniss of her non-black sister Primrose. Obviously, these Twitter users need a lesson in reading comprehension because in the book Katniss explicitly says that despite her looks, Rue is “very like Prim in size and demeanor.” As tumblr Hunger Game Tweets says, these so-called “Hunger Game fans” should be exposed for “[daring] to call themselves fans yet don’t know a damn thing about the books.”

It’s almost as though some readers consider book characters white until proven black. Even if those complaining claim this isn’t a “racism” thing—although it totally is—you would think that true Harry Potter fans would be reverential towards the series’ creator, Rowling, and accept her word as the gospel truth. If J.K. Rowling tells you Hermione can be black then, by god almighty, you better believe she can be black.

Let’s be honest here, your childhood is not “ruined” because a black actress is playing a character you always pictured as white. The things that actually ruin childhood are a lot less trivial and a lot more psychologically damaging, so get over it, drama queens. If you don’t want to go see Harry Potter and the Cursed Child because you are so close-minded you can’t watch a black woman play Hermione Granger, then don’t. In fact, I feel sorry that you have no imagination whatsoever. There are those of us who welcome a new interpretation of a beloved book character and we shall be the ones filling the seats come opening night.