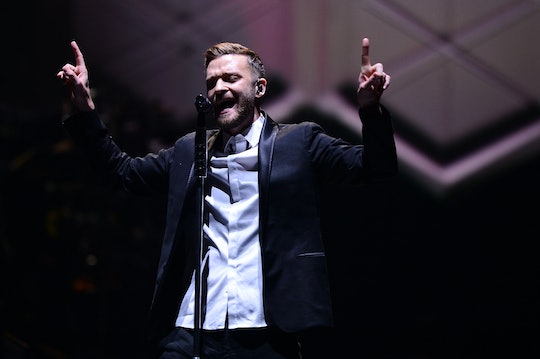 Super Bowl LII is finally here and with everyone tuning in for the big halftime performance, you may also be wondering how to get tickets to Justin Timberlake's tour. Timberlake has released a brand new album and a new tour as his headlining act for the 2018 Super Bowl has been approaching. Fans are so excited to hear some of his new music and can't wait to see him in concert. So, where is Timberlake touring and how can you buy tickets? Here's what you need to know.

Timberlake revealed to Rolling Stone that his North American tour kicks off in order to promote his new album Man of the Woods. In a trailer for the tour, Timberlake talked about the meaning behind his latest music. He explained:

In the tour trailer, Timberlake gives a behind-the-scenes look at his creative process.

What makes this tour even more meaningful? According to Vulture, Timberlake named his newest album after his toddler son, Silas, “The album is named after the my son. His name means ‘of the woods.’ Stop telling me I’m making a country album," he explained, according to Vulture.

So fans can likely expect a few shoutouts to little Silas during her performances. And there are plenty of opportunities to see him perform: Timberlake's tour has 27 scheduled dates starting in mid-March lasting until the end of May all across the country and in Canada. And, fortunately, when it comes to purchasing tickets for the tour, there are several websites that are selling tickets. Click here to purchase tour tickets via Ticketmaster. Another site selling tickets is Vivid Seats and you can also find tickets via StubHub.

Seats for Timberlake's tour range anywhere from $49.50 to well over $1,000, but prices depend on seats, as well as the venue location. There are also multiple packages available.

According to The Q Arena, the "Stage Bar" VIP Experience includes:

The GA Party Pit Experience has:

For the Man of the Woods Premium ticket bundle, the concert-goer gets their reserved ticket, limited show poster and prints, a VIP laminate and lanyard, along with access to an on site concierge. There is also a Man of the Woods GA Floor ticket bundle, which includes the same perks, but different "seating", according to Justin Timberlake's official VIP tour website.

The Man of the Woods first tour date happens five weeks after the Super Bowl, scheduled for March 13 in Canada, ending on May 30 in his hometown of Memphis. Ticket sales are sure to sky-rocket after Timberlake's halftime performance today, so you'll want to get 'em while they're hot.