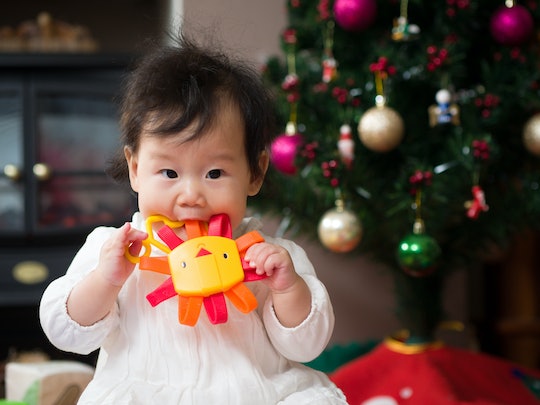 Teething is a universal experience that every parent and child goes through. But what that experience looks like can vary widely from the age of the first tooth eruption to the symptoms your baby exhibits. Naturally, parents don't like to see their infants in distress. If you think your child is experiencing teething-related discomfort, the first thing you may wonder is how to get your baby to take a teether. Experts agree that there are a variety of methods for soothing sore gums, so before you rush out to buy a new teether, try using what you already have on hand. From a pacifier baby already likes to a cold wash cloth, there are plenty of DIY ways to help your baby through the teething process.

The main functions of a teether are to apply pressure and soothe the baby, according to Dave Tesini, a pediatric dentist and Associate Clinical Professor at Tufts University, School of Dental Medicine. That's why he recommends beginning your soothing efforts with a pacifier, if your child has already been introduced to one. For example, Tesini is a Medical Advisor for the Smilo pacifier and tells Romper that it is designed to fit in the mouth and touch the palate properly, which has a soothing effect on babies.

Beyond pacifiers, Tesini recommends giving your baby a cold washcloth to chew on. He also mentions the popular advice to offer a frozen fruit or vegetable to chew on — with a word of caution. Something solid like a carrot could work, but an apple or similarly more "mushy" fruit could become a choking hazard as it thaws. Remember that babies aren't used to chewing solid foods, says Tesini, and always supervise your child while they're using frozen produce as a teether. Overall, Tesini advises that the brand or kind of teether you buy isn't as important as making sure to avoid any teether made of harmful materials. For example, soft wood or plastic with water inside could both start to chip or crack, potentially irritating your child's gums or even posing a choking risk. Before buying teething medicine from the drugstore, talk to your pediatrician about the safest products.

During our phone interview with Tesini, Romper also asks about important teething basics. Parents should know that the first tooth to erupt or come in is usually a lower front tooth. You can expect this to happen between 5 and 9 months, though some babies wait longer for their first tooth. Tesini debunks the myth that there is any association between the age of the first tooth and future intelligence. Whether your baby is the first in their play group to get a tooth or the last, it doesn't mean anything about how smart they are. Gender may also have something to do with the timing of the first tooth, as girls generally get and lose baby teeth earlier than boys, says Tesini.

Tesini also points out the important distinction between systemic and local symptoms of teething. The former refers to ailments happening elsewhere in the body, such as diarrhea, constipation, fever, or rashes. There is no scientific evidence that any of these systemic symptoms are related to teething. It's more likely to be an unfortunate coincidence that your baby gets their first tooth and a viral infection all in the same week. On the other hand, local symptoms that are signs of teething include finger biting, putting fingers in the mouth, and irritability.

What else does a pediatric dentist want parents to know about teething? While it's often considered an unpleasant thing kids go through, like an illness, Tesini reminds us that the eruption of a tooth is also a positive milestone. He looks at teething as a sign that baby is getting ready for the next food progression stage, whether that's from breast milk or formula to puréed foods, or from the latter to something harder like a cracker.

Finally, Tesini offers these oral health reminders: No bottle to bed, no sugar on the pacifier, start a tooth brushing routine as soon as the first tooth comes in, and establish a dental home early on. Your pediatrician can supply a list of local pediatric dentists if you want recommendations. And for all of your teething and other dentistry related questions, Tesini recommends the American Academy of Pediatric Dentistry as a wonderful resource for parents.