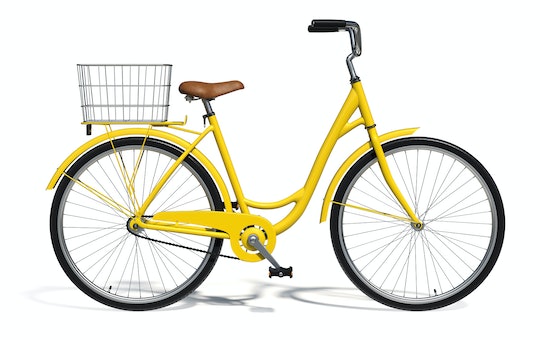 How To Gift Wrap A Bike Like A Pro, Because It's Hard AF

We're headed into the final stretch before Christmas is upon us, which means some people have finished their holiday shopping and even stocked up on all the wrapping paper, tape and bows they'll need. The rest of us, however, are still scrambling to order holiday gifts, and we're probably going to procrastinate wrapping them until it's midnight on Christmas Eve like we do every year. Inevitably, there will be at least one item that's seemingly impossible to wrap, which is why we've compiled loads of ideas for how to gift wrap a bike like a pro, er, or like an elf!

There are lots of ways you can approach gift wrapping a bike so that your kid doesn't quite know it's a bike or so that it just looks extra festive sitting under the tree when your kid wakes up on Christmas morning. You can end up using a whole lot of wrapping paper or fabric, or opt for a bike-wrapping bag that's designed for the sole purpose of covering up the hot new set of wheels you got for someone special in your family.

hot new cycle you got for wrapping up a bicycle without wrestling with wrapping paper and tape at midnight Christmas Eve.

By far the easiest way to wrap a bike is to buy a bike wrapping bag from somewhere like Amazon. You will, however, need to give yourself at least two days notice in order for your wrapping bag to arrive in the mail. If your bike is for a tiny tot and not much bigger than a balance bike, you could probably find a jumbo sized bag to fit it at local store, something like a laundry sac (that's cute enough that you would actually end up using it afterwards for its intended purpose). Whether you order it in advance or buy it on the fly, you'll be relieved knowing that you won't be wrestling with wrapping paper and tape come Christmas Eve.

Another relatively simple way to wrap a bike that doesn't involve entire rolls of scotch tape is to wrap the bike in a cardboard bike box. If the bike didn't come in a box, you can find one online, though a little bit of bike deconstructing may be required. They can be a little expensive for cardboard, but think of the amazing fort that your kid can make afterwards. It's basically a two-in-one gift.

Wrapping the bike in a box will still require more wrapping paper than usual, but there won't be any weirdly shaped parts to wrap around, and your recipient won't be able to guess the contents from its obvious shape. You'll just have a large, yet simple, box to wrap. The downside of keeping the bike in the box is that some assembly will still be required on Christmas morning, meaning your child won't simply be able to tear off the wrapping paper or untie the bag and wheel the bike out into the road. And if you live in a snowy town, that might keep your kid from trying to ride down the hallway.

Finally, if you have some time and patience on your hands, you can stock up on a few rolls of sturdy wrapping paper and wrap every last piece of the bicycle, not unlike this example:

As you can see, the item is easily distinguishable, but your recipient will still have fun unwrapping its contents.

If you're even more creative, it's even possible to turn the bicycle wrapping job into a clever creature, like a moose or a reindeer. Scotch, the popular tape and office supplies brand shared a six step tutorial on how to turn a bike into a festive moose, for those who happen to have energy left once all the holiday shopping is finished. You'll need cardboard, tape, wrapping paper, scissors and a utility knife. And when you're finished, you will need your phone because you should definitely Instagram-ing the heck out of that accomplishment!

For those who are short on time, energy, or creativity, another nice way to let your child know that he or she has gotten a bike for Christmas without ever having to wrestle with the wrapping paper is to wrap a bicycle ornament or charm, or a helmet. Leave the bike out in the garage and let your child open the reasonably sized gift and tell them to go out to the garage to find their real gift. The delayed excitement will surely be just as epic — and you will have potentially saved yourself hours of wrapping grief!