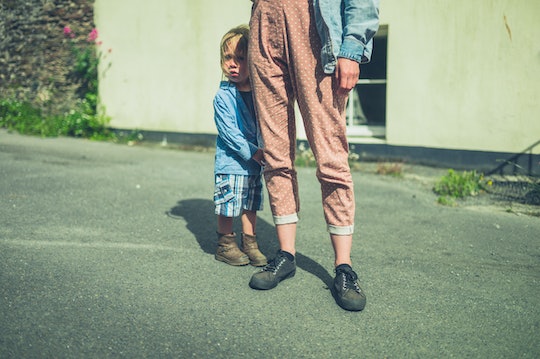 How To Handle A Shy Child, According To An Expert

Understanding your child isn't always easy, especially when they don't share a personality similar to yours. I mean, when you don't know where someone is coming from it's difficult to meet them where they are. So if you're wondering how to handle a shy child, and feeling guilty for not intrinsically knowing how to deal, don't. There is no one-size-fits-all manual for this parenting thing.

Romper spoke with psychologist Eileen Kennedy-Moore, author of Growing Friendships: A Kids’ Guide to Making and Keeping Friends to learn more about the best way to approach and, when called for, help shy children.

According to Kennedy-Moore, shyness in a child is not something to be concerned about as a matter of course. "There are a lot of ways to be social," she tells Romper via phone. "Not everybody has to be a life of the party extrovert. There's certainly room in the world for a quieter way of interacting."

To that end, she urges parents and caregivers to avoid telling a child they're shy, even if they show what she refers to as a "slow to warm up" temperament. "You don't want to slap a label on the kid because then they think there's no altering this, I'm doomed to this forever, and this is what I'm supposed to do and expected to do."

In fact, she assures concerned parents that one can be quiet and shy as well as social, citing that shy children tend to fall into two categories: those who isolate themselves and those who passively engage with their peers. The latter group, she says, tend to do just fine socially. "If they're smiling and having a good time, and others are having a good time with them, that's totally fine," she continues. At the end of the day, it's about having options and knowing how to navigate a social landscape.

"The question is can your child interact with other peers when they want to?" she says. Preferring time alone is totally fine — surely we all know adults like that or maybe are adults like that! But having the confidence and social skills to be able to engage with peers is crucial for healthy development. "We want [children] to have a range of behaviors in their repertoire," Kennedy-Moore tells Romper.

So what should we do for children who are isolating themselves and have difficulty engaging socially. Kennedy-Moore offers some ideas. At home, parents can try role-play with their kids by lining up stuffed animals and play-acting how to meet them: eye contact, smile, and say hello. She suggests this can build a child's confidence in how to meet real people in the real world. But at a certain point, of course, stuffed animals just aren't going to cut it.

"Friends really matter," she says, citing one-on-one playdates as the best thing a parent can do to help their child make and maintain friendships. She also recommends having two activities available ("Would you like to play with Legos or go outside?") and letting the guest choose one to avoid the initial play date awkwardness of, "Well... what do you want to do?"

When it comes to more casual interaction — at the playground, for example — joining a group can be a challenge, especially for shy children. Kennedy-Moore suggests that the way many parents encourage their children — telling them to go over and ask if they can play — is misguided.

"Observational research of playgrounds tells us that what kids need to do is watch and then latch: watch what the other kids are doing and then slide into the action without interrupting," she says. So, if a group of children are playing in the sandbox, a shy child can observe for a bit and then, perhaps, they will offer to get a shovel for the children they've been observing, or they will start engaging in the same activity nearby and gradually transitioning into the group.

Your "slow to warm up" or shy child may never become a social butterfly, and that's OK! Everyone engages in the world and recharges in their own way. Shyness only becomes a problem when it inhibits a child's ability to navigate necessary social situations. But with encouragement from parents and caregivers, they can learn to overcome their discomfort and make friends in their own way.