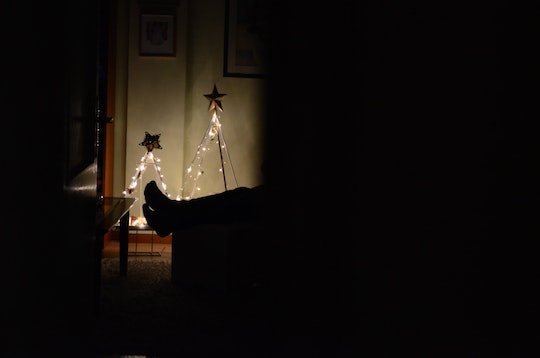 Regardless of whether you're in a relationship or single, there's one facet of the holiday season everyone can agree on: it is super difficult to hook up while on your home turf. If you're like me, and your childhood bedroom turned into a sewing room, then you have been regulated to an air mattress, making things that much more difficult. But if you know how to have sex on an air mattress, well, you're miles ahead of most of the population. As far as I'm concerned, air mattress are difficult enough to sleep on, let alone try and get down on. And yet, sometimes, you just gotta do what you gotta do.

Although you might think that there's nothing in particular you need to know about having sex on an air mattress, you'd be sorely mistaken. (And quite possibly sore by the time it's all over.) Just the way you need to be agile and careful when you're doing it in a twin bed, you need to be prepared to get busy beneath the twinkling lights of the season on that air mattress your mom so graciously blew up for you. Because the last thing you want to do on a blow up mattress is actually blow it up, right?

First things first, assess how trustworthy your air mattress is. Because when it comes to air mattresses, some are more worthy of a romp than others. Before you bring home a hottie for a holiday hook up (say that five times fast), check out how firm of a mattress you're working with. Because honestly, if your air mattress is saggy, has air leaks, or makes loud crinkling noises every time you move around on it, you might be better off taking your Christmas coitus to the floor.

Second, you'll want to clear the area. Make sure the area surrounding your air-mattress-of-love is free of any sharp objects that could hinder your humping. Nobody wants to be going at it only to have the air mattress meander over onto the heels you were wearing, one of your cousin's rogue legos, or any other unsuspecting sharp objects that could poke a hole in your air mattress and leave you and your partner feeling a little deflated.

It probably goes without saying that while having sex on an air mattress is not the time to go experimenting with a new position you've been wanting to try. In fact, you probably won't even want to attempt doggy style on an air mattress. Because once you get two adult bodies on an air mattress, it kind of turns into a trampoline. On the same note, if you're into toys of any sort, it's probably best to leave those ones beneath the tree during this romp. Consider them a gift for a different sexual escapade. Because if that vibrators vibrates right out of your hand, do you really want it bouncing off of that taut air mattress and vibrating all over your parents' freshly polished wood floors?