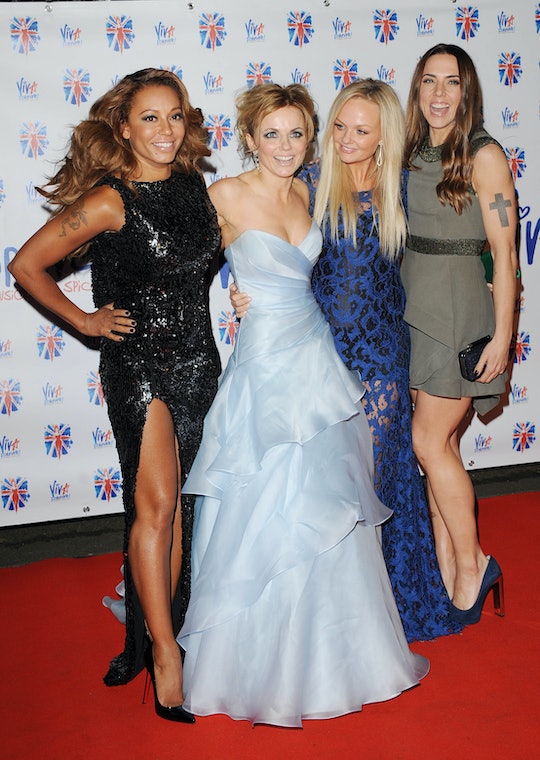 How To Hear The New Spice Girls Single, Because It's Gonna "Spice Up Your Life"

The Gilmore Girls revival isn't the only splashy throwback coming our way this Thanksgiving. After teasing their impending reunion (a tour? an album?) over the summer, three members of the '90s sensation, the Spice Girls, are officially back with a new spinoff group and a girl power pop anthem that'll transport true fans back to the days of "zigg-a-zig-ah," just in time for the holidays. Even though just three of the five ladies have reemerged in the spinoff group, GEM, you definitely want to hear the rumored new Spice Girls single, if only to remind yourself that friendship truly never ends — and it's available on YouTube, which didn't even exist back in the Spice Girls' heyday.

Melanie "Scary Spice" Brown, Geri "Ginger Spice" Halliwell, and Emma "Baby Spice" Bunton are reportedly the trio behind "Song for Her," which has apparently leaked, ahead of whatever else the women have planned for their reunion, according to People. Trading in that "zigg-a-zig-ah" of the the 1996 hit Wannabe for the "boom boom pop," of the 21st century, "Song for Her" retains the catchy pop beats and lyrics that made the Spice Girls such a big deal more than 20 years ago, but it also contains recognition that these women aren't teenagers anymore. "Where is that girl, is she long gone a-missing?" they sing. "Can’t bring her back, but it’s just reminiscing."

And GEM — which stands for Geri, Emma, and Melanie — is certainly going have fans reminiscing with the new song. Fans have known since the women released a short YouTube video celebrating the 20-year anniversary of their hit "Wannabe" and excitedly announced that they were throwing a party. At the time, it was anyone's guess exactly what what meant, but one thing was clear: "You’re all invited!" Brown, Halliwell, and Bunton yelled together.

Two former Spice Girls won't be joining GEM, unfortunately, and Melanie "Sporty Spice" Chisholm explained why she opted out in a personal for The Love magazine's September issue:

Truth be told, earlier this year after several face-to-face meetings with the girls I made the difficult decision not to be part of a proposed reunion with Emma, Geri and Melanie. Victoria ["Posh Spice" Beckham] had already bowed out understandably with the demands of her fashion label and her rather large family.

The hardest part for me was letting people down, the girls, the fans, civilisation?! Unfortunately something didn’t feel quite right and I had to follow my gut.

Even though Chisholm and Beckham aren't officially part of GEM, they'll certainly experience some nostalgia right along with us as the Spice Girls hit the airwaves once again.