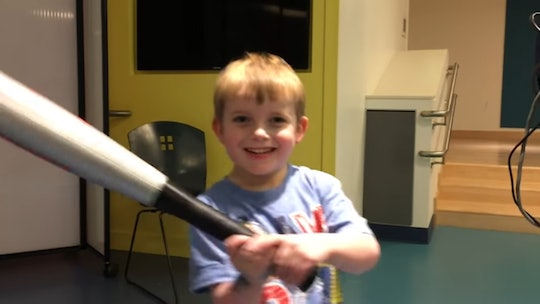 How To Help Ari Schultz After His Heart Transplant

Earlier this month, a little boy charmed the internet with his reaction to the news that he'd finally get the gift he'd been waiting for. But now things have taken a turn for the worse, and his fans might wonder how to help Ari Schultz, the heart transplant patient whose viral video captured so many people. Ari received his new heart, as promised, but now he's being treated for acute rejection, and on top of that, his family just learned that their home has to be completely demolished and rebuilt, according to People. Their home insurance will not cover the costs.

I'm lucky enough to know Ari personally, and I can attest that the adorable 5-year-old in that viral video is just as impressive in person. Ari was diagnosed with a congenital heart defect at 18 weeks gestation, and he was the first person ever to undergo two successful heart surgeries in utero. Doctors at Boston Children's Hospital have done incredible work to help Ari, performing dozens of surgeries and procedures, but they knew that eventually, he'd need a new heart. He was placed on the transplant waiting list this past summer, and admitted to the hospital in December, where he's stayed ever since.

Ari has handled all his troubles with grace one wouldn't expect from a person 10 times his age. Mike began chronicling Ari's trials online before he was even born. He's spent more time in the hospital than at home. He had to have a feeding tube surgically implanted as a baby. Multiple surgeries during his infancy left him with a morphine addiction, which led to a methadone addiction. For the better part of 2016, he had to wear a backpack that delivered constant I.V. medication everywhere he went. He celebrated the holidays and his fifth birthday in a hospital bed, and telecommutes to preschool. But that's just what he's had to put up with; it's not who he is.

Ari is an incredible athlete. Yes, a 5-year-old with a lifelong heart condition, one that's left him the size of a 3- or 4-year-old at best, is perhaps the best athlete I've ever met. Name the sport — golf, baseball, basketball, hockey — he's terrific at all of them. He challenged me to a game of horse once and mopped the floor with me. Last year, he was "drafted" as an honorary member of a local college baseball team, but honestly, I'd bet that he could hold his own with his teammates. "He has a zest for life," Ari's mom Erica told the local ABC outlet in November. But in a YouTube video earlier this week, she describes that same boy: "He's scared; he's terrified." But she also notes that "he's being brave, and he's teaching us how to be brave."

Ari's parents, Mike and Erica, split their time between staying with Ari in Boston and at home with their two other children, Lexi and Eli. In between work and caring for their kids, they've found the time to organize a charity golf tournament to raise money for other families affected by congenital heart disease, advocate for organ donation, and start a blood drive in their town. If anyone deserves some good luck, it's the Schultz family. But they got just the opposite; Mike recently found a mushroom growing out of a light switch in their basement, which led to the discovery of mold throughout their ceilings, floors, and walls. The house is beyond repair. Ari has been fighting to become healthy enough to return home, but now he no longer has one.

The Schultz family has repeatedly declined help in the past, but the prospect of tearing down their house, building a new one, and renting a temporary home, all while still paying off the mortgage for the old house, is more than they can handle. As Mike explained on the family's blog, he came to the realization while talking to another dad at the hospital. They both shared an inclination to handle problems themselves, he wrote, but "we need to learn from our sons about being brave, and about what manning up really means. If manning up means asking for help – the exact opposite of what manning up feels like it should be – then so be it."

A friend has created a GoFundMe page to help them with the costs. A generous general contractor has agreed to donate his time to them, but they still need many other professionals and materials before work can begin. A full list can be found on their website, Echo of Hope. They're also appealing to businesses such as Home Depot and Whirlpool for assistance, and have asked for help getting in touch with company executives. You can keep up with Ari on Facebook, or read the family's blog to learn more about him.