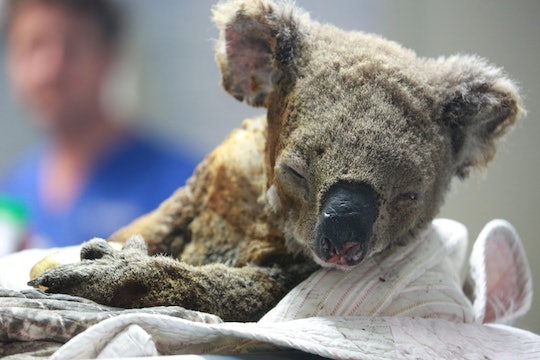 An unprecedented number of bushfires have been blazing in New South Wales, Queensland, and Victoria since September, weaving a path of deadly destruction across Australia's western and southern regions. And although disasters of such an enormous scale can often leave people feeling lost or helpless on how they can assist, there are a number of ways to help Australian wildfire victims and wildlife who've been affected.

At least 17 people have been reportedly been killed as a result of bushfires in Australia, according to CNN. But it isn't just humans grappling with the fires' effects. Ecologists at the University of Sydney have estimated that nearly half a billion animals are likely to have been killed in the fires, according to HuffPost. What's more, The Guardian reports that more than 5 million hectares of land has been destroyed across the country.

Although this fire season has seen fires break out in every Australian state, New South Wales remains the state hit hardest by the brushfires. With high winds and hot and dry temperatures expected over the weekend, CNN reported that authorities in New South Wales declared a state of emergency Thursday — the third declared in New South Wales since November — as the state's Rural Fire Service prepared for fires in the region to worsen. To further help those impacted, Australia's Defence Force has been deployed to deliver supplies and assist residents living in isolated communities nationwide evacuate to safer areas, according to The Guardian.

Here are a number of ways you can help Australian wildfire victims and wildlife: