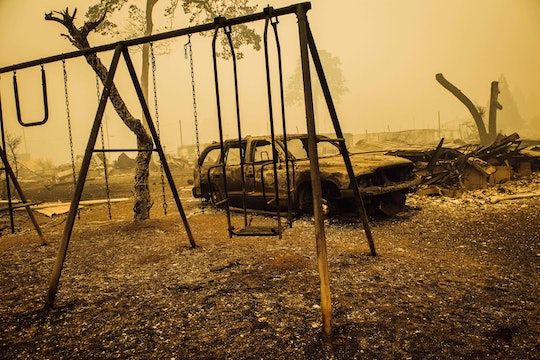 How To Help Families Affected By The West Coast Wildfires

At least 15 people have been killed by ravaging wildfires in California, Oregon, and Washington, according to CNN. But there are ways that people can help the families impacted by the west coast wildfires that continue to rage on into the weekend.

About 500,000 people in Oregon have had to evacuate their homes, CNN reported, as Oregon firefighters along the pacific northwest attempt to contain 38 active wildfires across the region. There are about 29 major wildfires still burning in California, setting record breaking numbers in the total amount of acres burned. Some of these fires have been manmade; tragically, a "smoke generating pyrotechnic device" used during a gender reveal party can be attributed to one California wildfire. In Washington, there have been more than 330,000 acres burned this week, according to The News Tribune. "This is an unprecedented and heartbreaking event," Washington Gov. Jay Inslee said in a press conference on Tuesday.

These fires have led to massive power outages, reduced air quality, and people losing their homes, according to USA Today. And there are people that will be impacted by these wildfires for a very long time. But there are ways that people all around the world can help the victims of the fires as they continue to cause devastating loss into the weekend.

You can donate your money or new items to a number of charities that are helping with relief efforts. Baby2Baby has sent over emergency supplies — such as masks, diapers, wipes, and portable cribs — to families in California who have been displaced by the fires. You can help with their efforts by donating to their charity list through Amazon Smile.

The American Red Cross is on the ground in the Pacific Northwest, working alongside partners to make sure that people have shelter during these uncertain times. You can help by donating money to their wildfire relief efforts or texting the word "REDCROSS" to 90999 to make a $10 donation to relief efforts.

The Salvation Army is deploying mobile kitchens to provide food, hydration, and comfort to the victims of the wildfires. You can help with their regional efforts by donating items to wildfire relief or money to help with their efforts.

GoFundMe has set up an official fundraiser to help with general relief that will support a range of needs for the victims. The fundraiser has a goal of $70,000 and has already surpassed $60,000. Donations made to Global Giving's California Wildfire Relief Fund will provide emergency funding to locally driven relief efforts. They have received over $106,000 in monetary donations so far.

The United Way Bay Area is accepting monetary donations that will be applied to immediate and long term recovery assistance for residents in communities across the Bay Area that have been impacted by the fires. The California Community Foundation is accepting monetary donations for immediate disaster relief and long term recovery efforts for communities across the state.

The links between these wildfires and global warming are "straight forward," according to the New York Times. Increased warmer temperatures help accelerate these fires, according to CBS News. "As we learn more, we are finding that many climate change impacts, including these sorts of extreme weather events, are playing out faster and with greater magnitude than our models predicted," Michael Mann, distinguished professor of atmospheric science at Penn State told CBS News.

Climate change is a huge issue in this upcoming election and people are being encouraged to vote for candidates who will work to protect the environment to ensure that disasters like these don't happen again. You can also contact your elected officials and encourage them to vote on climate change action policies.

Tell everyone you know about what is going on. Post about it on your Facebook wall, create an Instagram story, write a tweet. Spreading a little awareness about the devastation currently happening in the Pacific Northwest can help inform others about what is going on and inspire them to make a change, too.

A little bit of help goes such a long way.