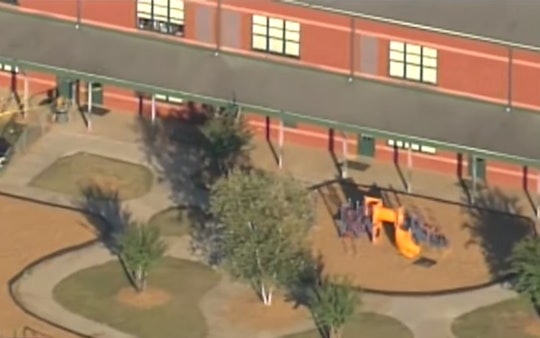 How To Help Jacob Hall, The Townville 6-Year-Old In Critical Condition After Being Shot

On Wednesday afternoon, an armed assailant opened fire on an elementary school playground in Townville, South Carolina, injuring two students and a teacher. First grade teacher Meghan Hollingsworth and one of her students have been treated and released from the hospital, and now people are wondering how to help Jacob Hall, the 6-year-old in critical condition at Greenville Memorial Hospital. The boy was airlifted to the hospital to undergo surgery after the attack, according to local NBC affiliate WYFF, and is awaiting another surgery once his condition is stabilized.

Travis Paige, a friend of Jacob's parents, Rodger and Renae, has set up a GoFundMe page for Jacob with a goal of $50,000. As of Thursday afternoon, donations neared the halfway point. Paige wrote that "Rodger and Renae will need to be with him as much as possible which means they will have to miss work," and he doesn't want them to worry about bills piling up while they stay by their son's side. According to Renae's Facebook page, Jacob has a 4-year-old sister and a 2-year-old brother. He just started first grade at Townville Elementary about a month ago. "We appreciate the community’s support, especially the Townville Rescue Squad, who treated Jacob onsite and brought him to the hospital," the family said in a statement obtained by WYFF.

Anderson County EMS director Scott Stoller said that school nurses and emergency responders initially treated Jacob at the scene, and "without their early intervention the outcome would have been very different," according to CNN. The suspect, a teenager, is now in custody. He reportedly placed a tearful, unintelligible phone call to his grandmother just before the rampage, which led her to check on him at home. The boy wasn't there, but his father, Jeffrey Osborne, was found at the scene, dead from a gunshot wound.

According to witnesses, the teen opened fire on the playground and appeared to be heading toward the school, but teachers locked the doors and prevented him from entering. He was eventually tackled and detained by volunteer firefighter Jamie Brock, who was unarmed. Brock has declined to speak to the press, but Stoller said that Brock claims it was "nothing any other firefighter wouldn't have done." According to South Carolina Rep. Alan Clemmons' Facebook page, the shot severed Jacob's femoral artery, and Jacob "died twice, and was revived, during medical transport and again during surgery." His condition is still critical.