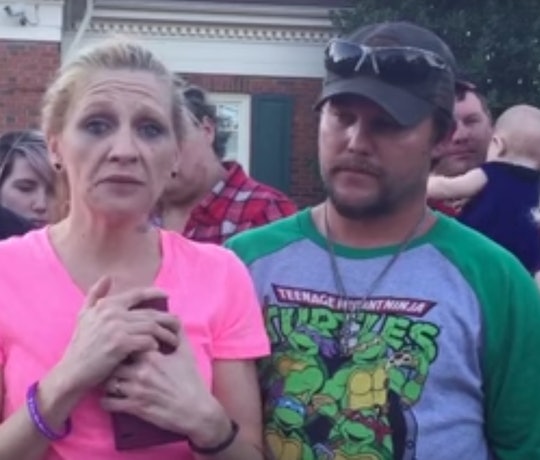 A shooting at Townville Elementary School in South Carolina last week shook the nation, but news of a 6-year-old student's death over the weekend left the country reeling. For those wondering how to help Jacob Hall's family after his funeral, there are ways to offer support from anywhere in the world.

On Wednesday, a boy allegedly killed his father before going to Townville Elementary School and opening fire, NBC News reported. Jacob, another student, and a teacher were all wounded in the attack. The bullet that hit Jacob damaged his femoral artery; according to CNN, the significant blood loss resulted in a brain injury, and Jacob died on Saturday.

Jacob is in heaven with God now. Words cannot express how much we will miss him. We want to express our thanks and appreciation to the community for the outpouring of love and support. We also want to thank the doctors and nurses at GHS Children’s Hospital, who did everything in their power to try to save Jacob, and to Ms. Hollingsworth, who put her life on the line to try to protect and save Jacob. We also want to thank Preacher Blizzard and the staff of Oakdale Baptist Church, the Townville Rescue Squad, Townville Fire Department, Fire Chief Billy McAdams and all of the first responders. This is an extremely difficult time for our family, and we ask for privacy as we continue to grieve the loss of our beloved son. Funeral arrangements will be shared on Monday.

The boy's aunt released details of Jacob's funeral arrangements on Monday, CBS affiliate WLTX 19 reported. Family and friends' visitation will take place from 5 p.m. to 9 p.m. on Tuesday, Oct. 4 at Oakdale Baptist Church. Jacob's funeral is scheduled for 11 a.m. on Wednesday, Oct. 5 at the same location. It is unclear whether the funeral is open to the public, though it does not appear that the family has specified any funds or organizations to which they'd like to direct gifts.

Anyone wishing to financially support Jacob's loved ones may do so online; according to People, a GoFundMe page is raising money for Jacob's family. Created on Sept. 28, the GoFundMe page for Jacob's family is run by self-identified friend of the parents Travis Paige on behalf of Jacob's dad, Rodger Hall. The page has already raised more than $126,000 of its $200,000 goal in only four days and is still accepting donations. Paige also wrote that anyone who wishes to give a physical gift to the family can send mail to Rodger Hall at 323 Hickory Ridge Rd., Townville, S.C., 29689.

Because Jacob loved superheroes, his family is planning a superhero-themed funeral at Oakdale Baptist Church, CBS News reported. Jacob's mother, Renae Hall, said she doesn't want the ceremony to frighten children in attendance; for that reason, all guests (pallbearers included) will don superhero attire. Across the country, businesses and schools are announcing plans on Twitter to wear superhero gear on Wednesday in the boy's honor. Jacob's uncle, Johnny Bridges, said Jacob will wear a Batman costume, according to CBS News.

Renae offered a reflection on Jacob's life while speaking to reporters after her son's death, according to WLTX 19. She said, "Jacob was an angel that was brought to this earth to show love, to show kindness, and to show forgiveness. Jacob never had a bad intention ever in his body." He will surely live on in memory as a true superhero.