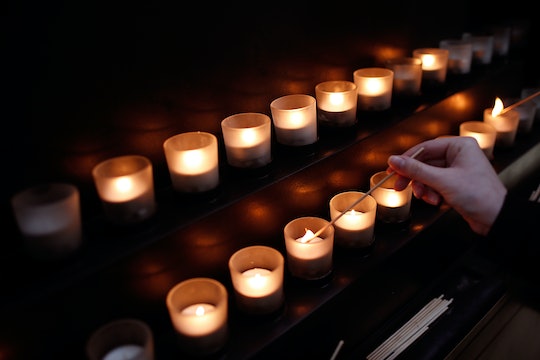 How To Help Jonathan Martinez’s Family

Jonathan Martinez died in the San Bernadino shooting Monday, the result of injuries sustained because he was standing behind his teacher, Karen Elaine Smith, when the gunman began firing, according to Heavy.com. He was just 8 years old. In the aftermath of the horrible attack, people are wondering how to help Jonathan Martinez's family following their loss, and are looking for ways to aid them during this obviously difficult time.

Update: To donate to the Martinez family, visit this GoFundMe page, which was reportedly started by Jonathan's cousin, Brianna Lopez. According to the page, the money will go toward Jonathan's funeral expenses and meals for his family.

The other boy, a 9-year-old, is reportedly stable, and his name was not released, according to CBS Los Angeles. Once Martinez's name became publicly available though, many people are looking for ways they can help the little boy's family as they grieve such a senseless loss.

The community is remembering Martinez in other ways following his sudden and tragic death. Heavy.com reported that Martinez was a member of a Little League team, and that his teammates held a tribute for him the evening of his death.

Alongside a cross, Jonathan's name was lit in colored lights, with several tiny battery-powered candles added to the memorial as well.

As it hasn't even been a day since Martinez' death, it's still very early for anything official to be organized to help his family with anything like expenses. There will probably be organized efforts to aid them soon, but it's likely that the family is seeking privacy at this time while they try to figure out how to navigate a world without their son.

There is also no mention of anything being organized by Martinez' school yet. The San Bernadino City Unified School District's website states that the "District's Crisis Counseling Team will be available to all North Park families, students, and staff on Tuesday," at an area middle school. It is probable that the school is focused on dealing with the trauma of the event with students and families, and may organize memorial or fundraising events at a later date.

But there are other ways people can honor Martinez's memory. His Little League team members modeled an excellent option — memorializing Martinez and remembering his life with a beautiful tribute is one way to do some small thing to remember the little boy who lost his life.

The best thing that can be done for Jonathan Martinez's family at the moment is to give them privacy. Such a public tragedy means they will likely have to grieve publicly to at least some degree — and that will probably be very difficult. It's important to take their cues in the coming days on how to help them honor Jonathan.

This story will be updated with information about fundraisers for the Martinez family as it becomes available.