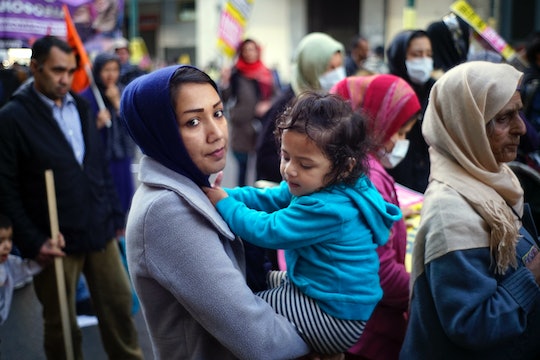 How To Help Mothers In Syria

The current situation in Syria has found itself squarely in mainstream headlines of late. With at least 89 dead, the recent chemical attack on the country's civilians has wreaked even more havoc and devastation on an already suffering people. Now more than ever, Syrian families need our help, so here's how to help mothers in Syria as they struggle to stay safe.

In the throes of a civil war, Syria's condition continues to worsen. Just last week, U.S. officials believe that President Bashar al-Assad used sarin gas in a chemical attack on Syrian citizens in the town of Khan Sheikhoun. In response to this horrific event, President Donald Trump ordered an airstrike against a Syrian airbase, signaling a departure from Trump's previous stances on Syria, which he held prior to the chemical attack, and which were solidly against Middle East intervention in general.

Regardless of how you feel about the United States' involvement in Syria, though, aiding Syrian mothers is something everyone can agree on. Families are suffering and are devoid of options and opportunity. While Syrian refugees certainly need your assistance, mothers still living in Syria and raising their families need more help than most (which says a lot, all things considered).

If you're looking to give monetary assistance, donations to Samara's Aid Appeal support hospitals and medical teams in Syria. Giving to UNICEF on Syria's behalf, as well as Save the Children's relief efforts, are also top-rated charities worthy of your much-needed dollar. If you're in the United Kingdom, you can get a little active and organize a collection of clothes for Syrian mothers and families as well.

A United States-based group, NuDay Syria is an organization that "advocates for girls and women who now find themselves with no male breadwinners and often have little skills and experience earning and providing for their families," collecting supplies for Syrian families as well. Noting on their NuDay Syria Facebook page that they're low on food, the group hosts supply-raising events "to empower and aid mothers and children inside Syria with dignity." Collecting containers full of protein bars, clothing, medical supplies, and other needs, NuDay Syria is taking an active step in order to help.

Another way for moms to help Syrian moms? Host a Diaper Party in order to help meet the "urgent need for diapers" in refugee camps in Greece, Serbia, Jordan, and France. The organization Carry the Future suggests that hosts invite guests, "asking them to please bring one pack of diapers and be prepared to 'buy' one pack of diapers online at the party with a $10 donation." The group also welcomes baby carriers for refugees, lightening the literal load placed on mothers traveling with infants and little ones.

It's easy to get caught up in an upsetting news cycle and stay trapped in the sad state of things, but it's even easier to do something productive about it. Small donations, either of time, money, or resources, are key steps that everyday people are able to make in order to help mothers in Syria.