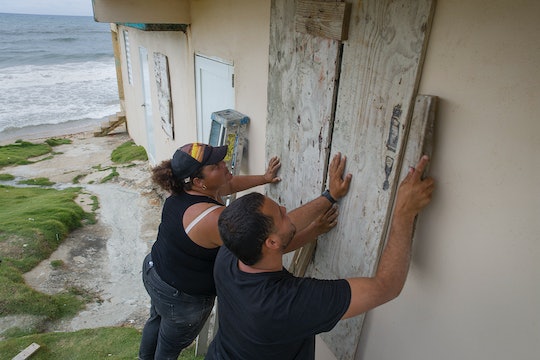 UPDATE: By Thursday morning, Hurricane Dorian had picked up strength on its way to the U.S. mainland and away from Puerto Rico, which dodged a "direct hit," CBS News reported. Dorian's path did result in reports of flooding and power outages in Vieques and Culebra, Puerto Rican islands located off the eastern coast. After Hurricane Dorian passed, Culebra Mayor William Solís told the Associated Press that they're "happy because there are no damages to report" and reported that only one community lost power.

EARLIER: As of Wednesday afternoon, Tropical Storm Dorian officially strengthened to a Category 1 hurricane. Which means, Puerto Rico, the Dominican Republic — and possibly, Florida — could be pummeled with heavy rain and sustained, strong winds. Flooding, power outages, and serious damage are all concerning possibilities at this point. And when the storm finally passes, many people will probably find themselves wondering how they can help Puerto Rico and the Dominican Republic in the wake of Hurricane Dorian.

After making its way through the Caribbean, Dorian was declared a Category 1 hurricane on Wednesday afternoon, NBC News reported. Dorian's center is predicted to pass over Puerto Rico late Wednesday, bringing with it 4 to 6 inches of rain, with 10 inches in some areas, according to CBS News. Meanwhile, tropical storm conditions are possible in parts of the Dominican Republic Wednesday night and into Thursday. Dorian is expected to strengthen to a Category 2 — and possibly even a Category 3 — hurricane as it continues to head toward Florida and the southeastern U.S. this weekend.

The system is reportedly on track to impact many of the areas hit the hardest by Hurricane Maria two years ago, according to CNN. Except this time, the Federal Emergency Management Agency (FEMA) is better prepared. The federal government has reportedly sent over 500 employees to Puerto Rico on top of the 3,000 previously sent, CBS News reported.

"There's probably 10 times the commodities on the island that were here pre-Maria, so we've spent the last two years learning some lessons and making sure that we're much better prepared," Nick Russo, FEMA's Puerto Rico field leader, told CBS News.

It's worth noting that after Hurricane Maria devastated Puerto Rico in 2017, some areas remained without power for 11 months, Vox reported. This lack of electricity, according to researchers, was responsible for a wave of deaths — close to 1,427 — that were reported following Hurricane Maria, according to PBS.

At this time, it isn't clear what areas will be impacted the worst by Hurricane Dorian. But here are some ideas of how to help ahead of the devastation:

Direct Relief already has a link for Hurricane Dorian. Other major organizations to consider donating to include: UNICEF, Save the Children, International Medical Corps, Global Giving.

Keep your eyes peeled for a GoFundMe Hurricane Dorian hub (there was one following Hurricane Maria), where you'll be able to find a number of campaigns raising funds for victims. You can also opt to start your own.

As TIME reported, additional volunteers will be needed after first responders have the situation stabilized. If you have the desire to help in-person, the FEMA directs volunteers to register. Additionally, you can check out opportunities at the National Voluntary Organizations Active in Disaster.

More Like This
Parents Are Missing Work At Record-Breaking Rates To Take Care Of Sick Kids
Here’s Why Your Vagina Itches At Night, According To Experts
Why Does My Vagina Smell Sour? Vaginal Odors & What They Mean
Can You Burp A Baby Too Hard? A Pediatrician Shares Tips For Gassy Tummies