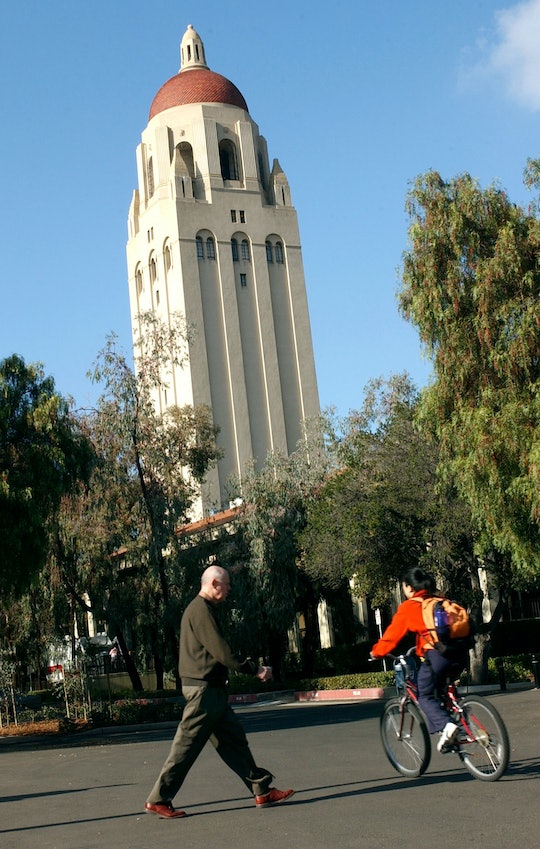 How To Help Rape Victims After The Stanford Case, Because We All Need To Stand Up

It hasn't even yet been a week since the Emily Doe "Letter to My Rapist" piece first appeared on BuzzFeed, but the virality and raw emotional impact of Doe's letter has been felt around the internet. The Stanford sexual assault case — in which 20-year-old former Stanford University student Brock Allen Turner was convicted of three felony counts of sexual assault — has brought the painful and difficult subject of campus sexual assault and the concept of rape culture back into cultural discourse. Following the Stanford case, some are wondering how to help rape victims in general. It's a worthy and valid cause, but one that doesn't always happen easily.

People need to think of the crisis of rape and sexual assault — whether on college campuses or in our own communities — on both the macro and micro levels. This is the common conundrum of social justice causes best illustrated by the drowning babies parable: Do you rescue all the drowning babies floating down a river, or do you run upstream to stop the king throwing the babies into the river? Regarding the concept of rape, do we focus on helping rape survivors or do we focus on stopping rape culture? Ideally, we'd do both. Here are just a few ways society can help rape victims on both an individual and cultural scale.

When Someone Tells You They've Been Raped, Believe Them

According to the Rape, Abuse & Incest National Network, it is estimated that 2 out of every 3 rapes go unreported. There are many reasons why a victim would be hesitant to report that they've been raped, and a common concern is that they fear no one will believe them. Belief holds a shocking amount of power as it gives validity to a person's experiences. When someone chooses to reveal that they've been victim to a horrifically intimate crime like rape, that takes vast amounts of bravery to do so. We can honor that bravery by validating what they've been through and believing what they tell us.

Don't Tell A Survivor What They Should Or Shouldn't Do: Let Them Make The Decisions

While there are many gender issues within the context of rape, power and control are the two biggest forces at work. It doesn't matter if the rapist is male or female; ultimately, rape is a crime of power over another person. If someone has told you've they've been raped, don't tell them they need to immediately get to the hospital or go to the police: let the survivor decide to take it one step at a time. He or she might not need medical attention or may not want to report it. When so much personal power is taken away from the survivor, empower them by letting them make their own choices about what to do. In this instance, support them — don't push them.

Colleges & Universities Must Treat Rape Like A Crime, Not Simply A Conduct Issue

This is where I think Stanford University excelled. When two Swedish graduate students discovered Turner raping a woman who was passed out, the school acted quickly. In an official statement from the university on Monday, officials revealed that Turner was investigated by the school and banned from its premises within two weeks of the crime occurring. They then referred to and worked with the Santa Clara County District Attorney’s Office to prosecute Turner. More colleges and universities should take cues from Stanford when it comes to the issue of campus sexual assault: Rape isn't just a matter of student conduct — it's a crime punishable by law in every state.

Parents Need To Talk To Their Children About Consent & Bodily Autonomy

It's up to us as parents to confront issues of rape culture, consent, and body autonomy to our children. But it's important to remember too that our daughters aren't always the victims and our sons are not always the perpetrators. A family discussion around consent needs to be framed in the context of power and control, and not the gender stereotypes commonly associated with rape. We can teach our boys to be champions of women, our girls to be defenders of men — all of them should know that consent is necessary, and no one deserves or has a right to someone else's body.