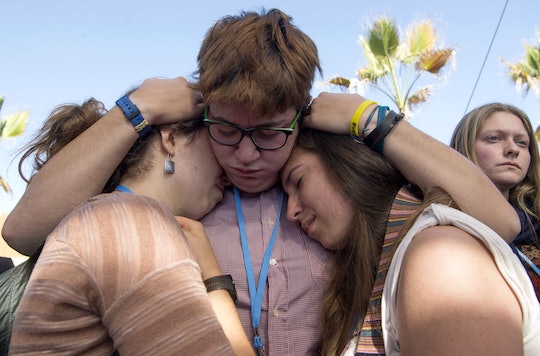 How To Help Sexual Assault Victims Following Trump's Win, Because His Victory Is A Trigger

So much about President-elect Donald Trump's campaign was controversial that, after a while, it stopped being surprising when he'd say something offensive. In the wake of Trump's election win Tuesday night though, the reality is settling in that a man who has called Mexicans rapists and suggested a ban on Muslims is now going to run the country. But something else is settling in as well: that Americans largely decided that the fact that Trump has been accused of sexual assault wasn't a good enough reason to not vote for him. For countless women, that truth is beyond devastating, so, now more than ever, we need to talk about how to help sexual assault victims following Trump's win. We may not be able to ease the pain of having pretty much the entire country telling them through their votes that what they experienced doesn't matter, but at the very least, we can try and provide strength and support at a time when it is certainly needed.

The idea that Trump's presidential campaign was triggering to sexual assault survivors is not even sort of new. Throughout the campaign, critics called Trump out for his sexist comments, according to Fast Company, and when The Washington Post reported that he'd been caught bragging about grabbing women by the p*ssy in a leaked Access Hollywood tape, it almost derailed his campaign. Or, at least, it seemed like it did.

Given Trump's victory on election night, it's become clear that, well, his self-proclaimed "locker room talk" didn't really hurt his campaign that much at all, nor did the subsequent allegations from numerous women that Trump sexually assaulted them, according to The New Yorker. What it did do though, is remind countless survivors of their own sexual assaults: according to Fast Company, the Rape, Abuse, Incest National Network (RAINN) saw a 33 percent increase in hotline callers and a 45 percent increase in web chat traffic on the weekend after the leaked audio went public. And now, seeing Trump win likely reminded many of them that even when women speak up against their abusers, it doesn't necessarily mean they'll suffer any consequences.

What's also heartbreaking is that the number of people who stand to be triggered by Trump's election win isn't even small. According to RAINN, "1 out of every 6 American women has been the victim of an attempted or completed rape in her lifetime," and the overwhelming trauma that violence creates is deep and long-lasting. Yet, as The Independent noted, the prevailing rhetoric among many voters remained that, in comparison to the controversy over former Secretary of State Hillary Clinton's e-mails, Trump could still be the "lesser of two evils," and thus, deserving of their vote.

It's too late now, of course, to hope that enough voters would find that idea horrifying enough before heading to the polls (judging by the 279 Electoral College votes he picked up, according to NPR, that most definitely did not happen). But Trump's win doesn't mean we should ignore it, or stop trying to communicate the fact that Trump's history matters, even if it didn't stop him from winning. By continuing to believe and hear and support sexual assault survivors, we can push back against what Everyday Feminism described as the "structural and societal barriers," that keep survivors from getting help.

Other ways to help sexual assault survivors who are struggling after the election? Everyday Feminism has said that being knowledgeable about assault and free of judgment or preconceived ideas is crucial. Listening without agenda, reminding them that the assault wasn't their fault, and understanding that everyone responds to their experiences in different ways, are also all important strategies for anyone looking to be an ally and support to a survivor.

Since talking about sexual assault can be so unbelievably hard, it might also be helpful to think about what kinds of questions and comments should be avoided, so you don't end up saying something unintentionally hurtful because you weren't sure how to respond. According to Pandora's Project, which provides support to rape and sexual abuse survivors, minimizing a survivor's pain ("you'll be OK," "it wasn't that bad," or any suggestion that they should get over it and move on) will only cause further damage. So will trying to magically fix it by providing recommendations, advice, or, of course, by suggesting in any way that they were asking for it, or that they could have avoided it (they weren't, and they couldn't have).

It is beyond heartbreaking to think of all the people who have been unfairly traumatized by Trump's presidential campaign, and it's even worse to consider that it might continue now that he's headed to the White House. But with that reality now having become unavoidable, the importance of being aware and sensitive to sexual assault survivors matters now more than ever. The good news at least, is that it's something we can do right now, and it can make a big difference.