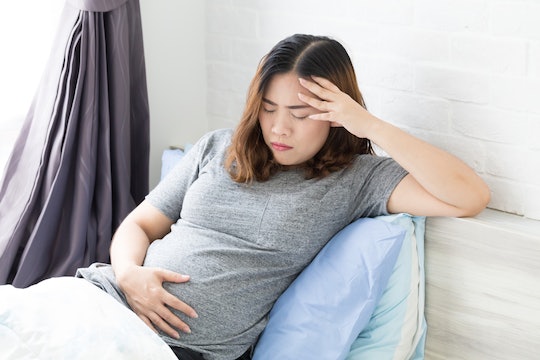 Early on in my first pregnancy, I knew something was wrong. I couldn't keep anything down, my limbs felt like they were made of lead, and even the most basic of tasks seemed Sisyphean in their difficulty. By the time I got to my first doctor's appointment, I'd lost 10 pounds. I was diagnosed with a condition known as hyperemesis gravidarum, and it lasted until the day I delivered my son. In those long months I had many friends ask what they could do for me, and knowing they cared to learn how to help someone with hyperemesis gravidarum meant the world to me. Because what they did, and what I learned, became invaluable as I would eventually suffer the same fate in my second pregnancy.

The things that are the biggest help to women suffering from hyperemesis gravidarum (HG) are also often the simplest. A trip to the grocery store so that they don't have to go to a place so surrounded by scents that might turn their stomach. An encouraging note or text message. Babysitting for a few hours so that she can go to and from the doctor's office or an errand alone. All of those things seem like the tiniest steps, but honestly, they're so very appreciated.

It feels like a cruel twist of fate to have the time that is lauded to be the most joyous in your life so tainted by illness and weakness. It tightens your whole being with a sense of vulnerability and anger the likes of which is hard to put into words. Like many women with HG, I was in and out of the hospital, requiring fluids and nutrients to be delivered to me via an IV. This wasn't a huge burden when I was pregnant with my first, but during my second pregnancy, it became a nightmare.

I was so fortunate to have good friends and family in the area who loved me and my son enough to help by watching him as I was shuffled from appointment to appointment while my husband worked long hours as a police officer. The nicest thing was that they asked how to help a friend with hyperemesis instead of just assuming they would know. If you're in that position, the first and best thing you can do is just to ask how you can help, instead of assuming. They might just need moral support or someone to vent to, or they might need someone to help weed their garden. You just need to ask.

However, in this instance, what you don't do is as important as what you do. When you tell people you have HG, many will assume it's just terrible morning sickness, and then proceed to tell you about the nausea they had during their first trimester, and how they ultimately resolved it by eating crackers or chewing ginger candy. They will then proceed to offer the advice of taking B-6 supplements or ask, "Have you tried those preggie pops?" or something similar. It's profoundly unhelpful, and after the millionth person offers that advice, it makes women with HG blood-boilingly angry. Do not, under any circumstance other than if the woman asks you for it, offer advice to someone with HG.

I was so triggered when I would see women doing this on Amy Schumer's Instagram posts about HG. Other friends of mine who also had HG felt the same way. We wanted to comment back in full internet troll fashion: "Hey! You don't give a woman who can't go an hour without puking your recipe for peppermint tea, you hag. You volunteer to walk her dog or do her laundry." Of course, none of us would do that (though, I guess I just did). It's hurtful. It's frustrating. Don't do it.

You help by being there if they want you. You help by letting them know you're thinking of them, and help ease the burden of everyday life. You go to bat for them with their bosses if you work together. You entertain their children and take them to get their IV flavor of the week. Mostly, you do what you would with any of your friends suffering a serious, debilitating illness. You show up. You do the work, and you let them rage.