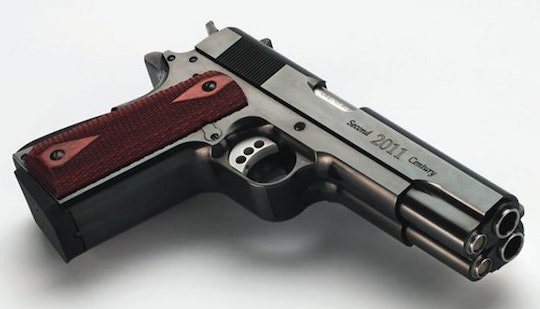 With the last week’s Planned Parenthood incident shocking us all — and the mass shooting in San Bernardino, Ca. Wednesday killing upwards of 14 people and injuring at least 21 — it’s about time we really talk about gun violence. And no, this doesn’t mean a conversation about mental illness or putting off this issue until the next tragedy. We really need to explore how we can decrease gun violence once and for all.

A 2014 Harvard-led study found there has been a mass shooting every 64 days since 2011. However, when we open the scope and talk about gun violence in general, the numbers become bleak. In August, Forbes reported that the Centers for Disease Control (CDC) determined that more young people die from guns than cars. With more than 32,000 people dying from guns a year, a Center for American Progress 2014 report predicted that at the current pace, gun-related deaths would top automobile mortalities in the next year — something that hasn’t occurred since 1994.

Though you may hear some people talk about how other countries are filled with guns, it is important to provide some context when talking about this charged topic. In July 2015, David Hemenway, director of the Harvard Injury Control Research Center and Harvard Youth Violence Prevention Center brought up a salient point about gun violence and mass shootings:

The US is average in terms of non-gun violence and non-gun crime. But we have many more guns, and much weaker gun laws, and thus far more gun deaths (e.g., gun homicides and overall homicides) than other developed nations. Not surprisingly, we also have many more mass shootings per capita.

Hemenway went on to talk about how other nations react to these tragedies differently:

Australia, for example, reportedly had 13 gun massacres in the 18 years before the Port Authur tragedy in 1996. The government’s response to that tragedy was a massive mandatory buyback program of semi-automatic long-guns and a tightening of their gun laws. In the 18 years since Australia has not reported a single mass shooting.

While the statistics and facts around mass shootings are sobering and can make us feel helpless, things can be done to gain a handle on this epidemic. And if countries like Australia can do it, so can the U.S. Here are four steps we can take to decrease gun violence:

Since mass shootings seem like they are happening everyday, a way to decrease casualties is to prohibit the purchase of large capacity ammunition magazines. The Law Center to Prevent Gun Violence reports that the Newtown shooter fired 154 rounds in under five minutes, thanks to the use of his 30-round assault weapon. The group points out that this tragic incident wasn’t an anomaly but a trend among mass shootings — about half from 1982 to 2002 used assault weapons. So, could you imagine how many lives could be saved by taking this simple step?

The Coalition to Stop Gun Violence has provided plenty of reasons why this move is so, so important. For instance, the National Instant Criminal Background Check System (NICS) has reportedly stopped two million felons and other prohibited individuals from getting guns and has deterred many more from buying a weapon. However, they explain why the “Gun Show Loophole” is hindering this tool’s (and others’) success:

Unfortunately, a majority of states have yet to take any action to regulate the private sale of firearms. In order to guarantee that criminals, domestic abusers, the dangerously mentally ill and others are denied unchecked access to guns, the US Congress should enact a federal law requiring universal background checks on all sales of firearms, including private sales.

Change Our Perception Of Gun Violence

If we looked at gun violence like every other public health issue, could you imagine the progress we would make? Not only do we need to perceive it as a public health issue — but one that can be avoided. One group, the Prevention Institute suggests for the creation of the National Institute of Violence Prevention at National Institute of Health (NIH) so that causes and solutions to gun violence can be deeply investigated. They continued:

We should fund the CDC to develop its infrastructure so it can track, assess and develop strategies to prevent gun violence, just as we do with tainted spinach and influenza.