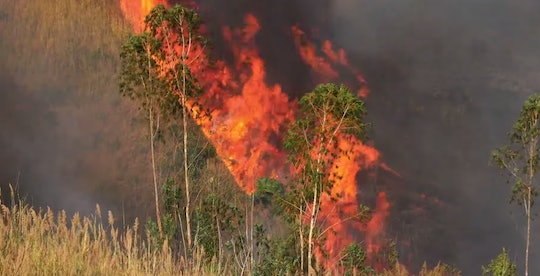 It's mind-boggling to think that the idea of climate change (something that's been scientifically proven, btw) is such a controversial topic. And it's not that politicians and world leaders are at odds about how to combat global warming — no, it's far more terrifying, actually. It's that many refuse to believe it's even happening. Ugh. So here we are — it's 2019, and the Amazon Rainforest is currently ablaze thanks to literally thousands of wildfires. And if you're wondering how you can help the Amazon Rainforest fire from spreading (you know, aside from flying to Brazil and attacking it with a hose), then you've come to the right place.

But first, allow me to paint a picture of what's going on. Because as I type this, the worst fire season is currently going down, with a record-breaking 72,843 fires occurring since the National Institute for Space Research (INPE) started tracking the rainforest in 2013. Not only are the fires so large, they can clearly be seen from space, but there have been 83 percent more fires than there were during the same period in 2018, according to Futurism. Which is definitely not good, considering the Amazon produces 20 percent of the oxygen in Earth's atmosphere.

So what's causing all these fires, you ask? Many of them are a result of farmers setting land on fire as a means to clear it for cattle, Reuters reported. This, coupled with Brazil's President Jair Bolsonaro relaxing environmental controls, has been a recipe for disaster.

“There is nothing abnormal about the climate this year or the rainfall in the Amazon region, which is just a little below average,” INPE researcher Alberto Setzer told Reuters. “The dry season creates the favorable conditions for the use and spread of fire, but starting a fire is the work of humans, either deliberately or by accident."

Circling back to the original question: How can you help? There are actually several ways to pitch in, according to Fast Company:

One thing's for certain: Something needs to be done — and fast. Smoke from the fires has even reached Sao Paulo, according to CNN, which is more than 1,700 miles away. Alarming photos showing the sky completely blackened by smoke and ash in the middle of the day have been popping up on social media. These images are frightening, to say the least.

It's easy to feel helpless as the Amazon Rainforest goes up in flames. And although you can't physically fight the fires, prevent farmers from deforesting for cattle, or force the Brazilian government to do more to protect the rainforest, there are actionable ways for you to make a difference.