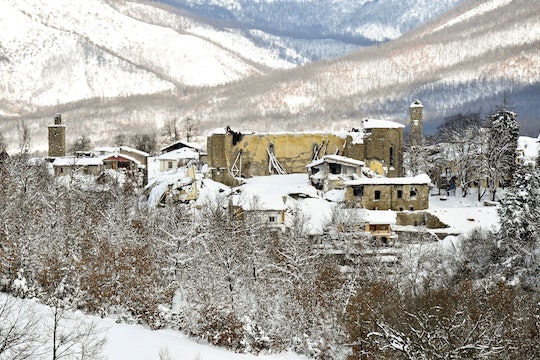 How To Help The Italy Avalanche Victims

After a series of earthquakes and aftershocks in Italy on Wednesday and Thursday, an avalanche in the Italian alps has nearly completely buried a ski resort, trapping guests and employees inside. People around the world are wondering how to the Italy avalanche victims, but sadly, most are feared dead. Four earthquakes registering a magnitude of 5.2 or higher struck in central Italy on Wednesday, according to the U.K.'s Daily Express. They were followed by at least 80 aftershocks throughout the night. This led to an avalanche at the Hotel Rigopiano in Abruzzo. Two survivors who were outside at the time have been rescued. Three bodies have also been recovered from inside the hotel, and about 20 to 30 are still missing.

The hotel is estimated to have held just 20 guests and seven employees at the time of the avalanche, as winter storms had left the area without power or phone service. Quintino Marcella, the employer of one of the survivors, told Italy's Corriere della Sera that all of the guests had checked out and were waiting for snowplows to clear the roads so they could leave. Giampiero Parete, a chef on vacation with his family, was at his car retrieving medicine for his wife's headache when the avalanche struck. She and the couple's two young children are still inside the hotel.

Parete said he was walking back towards the hotel when he "saw the mountain fall on the building." He was partially overtaken, but was able to cling to a tree branch, and eventually made it back to his car, along with hotel employee Fabio Salzetta. The pair sheltered in the car for hours. Eventually they were able to call for help by sending a message through WhatsApp that roughly translated to, "Help help we are dying of cold." Rescuers finally arrived by skis, and later helicopters. Both men are now hospitalized, and Parete is suffering from a serious, but not life-threatening, case of hypothermia, Corriere della Sera reported.

Fire Department spokesperson Luca Cari told the paper that the hotel "no longer exists," and reported mattresses and tree trunks littering the mountainside. Rescue workers have been digging in the wreckage and calling out to possible survivors, but so far, none have responded. The Italian Red Cross remains on the scene at the hotel, while simultaneously working to assist other victims of the snow emergency and earthquakes. The organization accepts online donations.