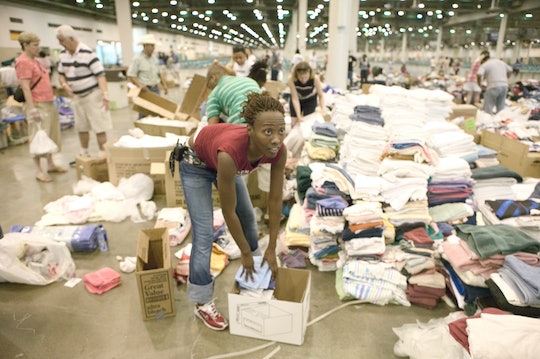 Southeastern Louisiana was battered by historic rainfall over the weekend — over 24 inches fell across the region — that left much of Baton Rouge, Florida, and Lafayette parishes flooded to catastrophic levels. On Saturday, Louisiana Gov. John Bel Edwards declared a state of emergency and deployed the National Guard to assist with search and rescue efforts. As many as 20,000 people were rescued from their homes over the weekend, and approximately 10,000 people stayed in shelters overnight Sunday, according to The Times-Picayune. With such widespread damage and so many displaced residents, many want to know how to help the Louisiana flooding victims, whether you're local to the area or wish to help from afar.

Several national relief organizations such as the American Red Cross and the Salvation Army are providing relief efforts in the region, as well as several local organizations, churches, and other community groups with boots on the ground. Speaking to Romper, Holley Payne, membership manager of the Junior League of New Orleans, spoke to the importance of helping the flood victims: "They helped us during Katrina and now it's our turn. All those parishes rallied for us, and now we're rallying for them. That's just what you do." Whether it's donating funds, diapers and clean clothes, or even donating your time — if you're so able — there are a variety of ways to help the Louisiana flooding victims that can best fit your level of volunteering.

For those who wish to help out the victims by donating funds to relief efforts, there are a number of funds and charities that have been set up in the wake of this weekend's flooding.

Thousands of Baton Rouge residents have lost everything in the floods from this weekend. Here's how you can donate to local groups and organizations accepting in-kind goods and supplies.

Donating Your Time For People & Pets

More Like This
How To Watch Elf In 2022, Including A 24-Hour Marathon
All The Nights The Grinch Airs On TV In 2022
Disney Introduced Its First Openly Gay Teen Character In Strange World
Kate Middleton's First Tiara Moment As The Princess Of Wales Honored Princess Diana