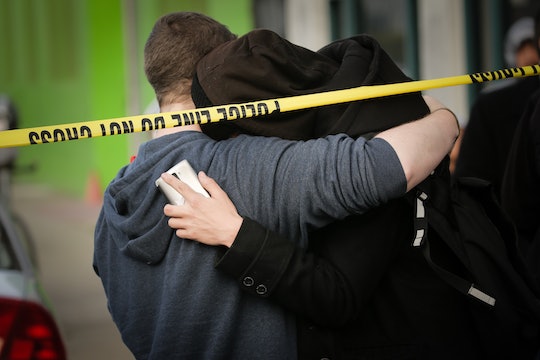 How To Help The Oakland Warehouse Fire Victims After The Tragedy

Most people look forward to Friday nights as a time to relax, get together with friends, and have fun. But unfortunately, this past Friday night turned tragic for partygoers at a warehouse in Oakland, California. A fire that erupted during a party killed more than 30 people. The loss of so many lives is truly heartbreaking, and for those who want to help, here's how you can help the Oakland warehouse fire victims.

The fire broke out at a warehouse known as the Ghost Ship on 31st Avenue in Oakland. The warehouse reportedly illegally housed artists who used the space to live in or to store their art. Between 50 and 75 people were on the second floor of the warehouse for an electronic dance concert, The Washington Post reported.

It's unclear how the fire started, and the cause of the fire is under investigation. Carmen Brito, a resident of the warehouse, told The New York Times that the fire started in the back of the building while she was sleeping.

The New York Times reported that 36 people have died from the fire — and unfortunately, that number may be higher. That's because the Oakland Fire Department has stopped search efforts temporarily since Sunday night, with almost one-third of the building left to be inspected, The Washington Post reported. The remaining structure is considered too unstable for emergency crew members to continue the search.

Sadly, the more victims there are, the more families that will need help to bury their loved ones. This also means the rescue effort will need more resources. So here are some ways people can help the victims of this tragedy:

The Gray Area Foundation for the Arts, a non-profit that uses art as a means of social impact, has set up a fundraising page on YouCaring.com. The donation page states that they hope to use the money raised to provide relief for "funeral, medical and health related expenses." The objective is to raise $250,000 — and right now, the Gray Area Foundation for the Arts is less than $30,000 away from meeting that goal.

The Oakland A's baseball team, as well as the Oakland Raiders football team, are matching any donations made on their YouCaring.com fundraising page. Initially, each team promised to match $30,000 in donations, but they've increased the amount they will match to $50,000, which should be a huge help. The money will go back to victims and their families.

Help The Survivors Piece Their Lives Back Together

A GoFundMe page has been started by Reina Lam, a performance and visual artist, to aid those who lived in the Ghost Ship warehouse. The campaign has almost met its goal of $10,000, with more than $9,000 raised so far.

For Oakland Residents Who Want To Come Together

On Wednesday, Dec. 7, you can attend two benefit events at Midsummer Studios to help raise money for the victims of the fire. The cost to attend is $10, and is a great way to bring the community together. The event will feature two films and music from Kimya Dawson, according to the event's Facebook Page.