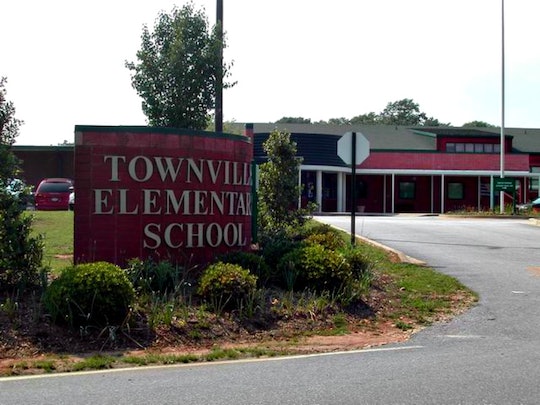 Shootings are terrible anywhere, but there's something about one at an elementary school that can really make you realize how terrible gun violence really is. Grownups can't handle tragedy like that, so expecting little people to process all that information is just too much. Unfortunately, if you're feeling like you want to reach out, there isn't much you can do right now to help the Townville Elementary victims. Police reported that they do have a teenager who is suspected to be the shooter in custody and luckily, there wasn't too much time for the alleged suspect to hurt too many people. They still have not released the name of the shooter, but the school did cancel classes for the rest of the week.

As of Wednesday afternoon there were three victims of the shooting. Two students were being treated for non-life threatening injuries and a teacher was taken to a nearby medical center. She is expected to survive. The students were evacuated to a nearby church where families members could pick them up. But there still isn't a lot of information on what the community or the families need. Presumably in the coming days, there will be fundraisers to help the families with any medical costs or for the school. Right now, it's just too early to tell what would be most useful, so Americans should probably just send support and solidarity for the time being — whether that's in person, for those who live in Townville or its surrounding areas, or on social media.

Update: A GoFundMe campaign has been set up for 6-year-old Jacob Hall who was injured in the shooting and remains in critical condition. So far, around $113,000 has been raised of the $200,000 goal.

South Carolina Gov. Nicki Haley put a statement out on her website saying,

As we work together with law enforcement to make sure they have the support they need to investigate what happened in Townville, Michael and I ask that everyone across South Carolina join us in praying for the entire Townville Elementary School family and those touched by today's tragedy.

Hopefully there will be something more tangible for Americans to do to help the South Carolinians. But fundraising is complicated in cases like this one. After the tragic shooting at Sandy Hook Elementary School, Sandy Hook Promise, a charity founded to support gun reform policy and the families, was founded in the state and even had the likes of country star Tim McGraw perform to raise money for its endeavors.

But 11 families have since distanced themselves from the organization, citing the belief that many donors don't know that money isn't going to families of the victims, but to policy and programs "We wish only to provide clarification for the many generous donors that believe they are directly supporting the families at the center of this tragedy by contributing to the Sandy Hook Promise," they stated in a press release.

Tim Makris, the managing director of Sandy Hook Promise, told Romper via email that the families thought that they "deserved funding from the concert" and that was what led to the break. Makris said that the original agreement between McGraw and organizers was always that the proceeds go to support Sandy Hook Promise programs and not the families — though the organization is run family members of the shooting victims and has helped them since its inception.

Sandy Hook Promise initially had three funds: a Community Fund for families, an Action Fund for advocacy, and General Program Fund. In 2015, the Community Fund was closed after donating $1,5 million to the families of the victims, and now all proceeds go to programs and policy. That's not a bad thing, in fact, it might be more useful in the long run, but too often people donate without knowing the specifics to all kinds of charities.

When it comes to donating to organizations that are formed following today's harrowing shooting, and all the tragic shootings before it, it's best to be careful and do your due diligence about where the money is going so that you're helping those who truly need it the most and who you, individually, want to support.