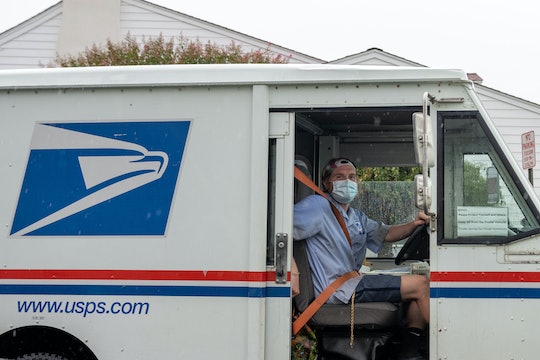 With the presidential election just around the corner amid the ongoing coronavirus pandemic, many Americans are depending on the United States Postal Service (USPS) to get their votes counted with absentee or mail-in ballots. Not to mention, families need essential items delivered to their homes. But, between financial woes and President Donald Trump's attacks on the post office, the agency is in trouble. Fortunately, though, there are a few ways you can help the USPS right now.

The USPS has been facing financial difficulties following a nearly $9 billion loss in revenue last year, according to USA Today. CNN has reported that restructuring as a result of cost cutting measures under newly appointed Postmaster General Louis DeJoy has led to increased delays in deliveries.

While the HEROES Act would provide $25 billion in relief for the USPS and, perhaps most importantly, help those who plan to vote by mail get their ballots delivered on time, it has yet not passed in the Senate.

Meanwhile, Trump has pretty much used the USPS as a political bargaining tool; according to Reuters, Trump said that he would agree with the funding if Democratic lawmakers "give us what we want."

"They want $25 billion for the post office," Trump said in an interview with Fox Business on Aug. 13. "Now they need that money in order to have the post office work so it can take all of these millions and millions of ballots. If we don't make the deal, that means they don't get the money."

It's also worth noting that Trump has also made false claims that mail-in voting leads to voter fraud. "Mail ballots are very dangerous for this country because of cheaters," he said at the White House earlier this month, as The New York Times reported. "They go collect them. They are fraudulent in many cases." According to the Associated Press, mail-in ballots are cast the same way as absentee ballots and voter fraud is incredibly rare.

While all of this is happening, families across the country are relying on the post office for a variety of reasons. So if you're looking to help, here are a few ways to do so.