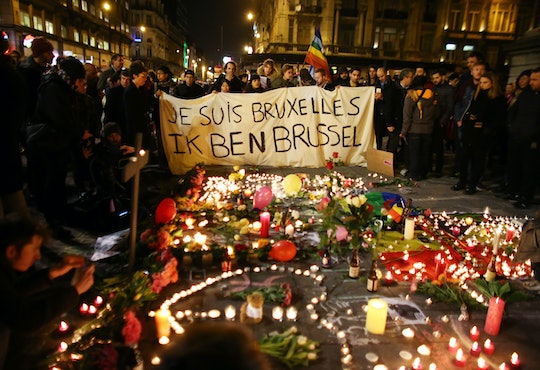 How To Help Those Affected By The Brussels Attacks

At approximately 8 a.m. local time (3 a.m. Eastern standard time), two explosions rocked the Zaventem airport in Brussels. Less than an hour later, another explosion struck the Maelbeek metro station. Between the two attacks, 31 people have died and more than 100 have been injured, according to BBC News. In the wake of the violence, many people not in law enforcement or emergency services are probably wondering how to help those affected by the Brussels attacks.

Those living in Belgium are helping as best they can, i.e. they are opening their doors — and their homes — to fellow Belgians, travelers, and tourists. Using the hashtag #IkWilHelpen, which translates to “I want to help,” Belgians are offering to support people who may be unable to get around because of the transit shutdown, and they are offering shelter to those in and around the affected areas, according to The Independent. (#PorteOuverte, the hashtag which literally means open door in French, is also being used — just as it was shortly after the November Paris attacks — as is #Brusselslift, a hashtag hoping to connect people in need of transportation to drivers who have empty seats, according to FOX News.)

But how can those living in neighboring countries, and abroad, help? What can Americans do? What can I do?

Sometimes when attacks like this occur, people have a knee-jerk reaction that involves profiling, discrimination, and — well — the spreading of hate. Attacks like this are cruel, horrific, inhumane and completely illogical, and so they often prompt equally cruel and illogical responses. But the best way to combat hate isn't with hate, it is with humanity. It is with #IkWilHelpen and #PorteOuverte. It is with love.

The attacks in Brussels were disgusting. They are upsetting. They are infuriating. (I get it. I'm pissed.) And while these attacks need to be discussed, what happened needs to be discussed, remember that the images we are seeing — and sharing — are of people: people with husbands and wives, children and grandchildren. So talk about Brussels. Scream about Brussels. Cry about Brussels, but be mindful many of these images are graphic and triggering. Be cautious viewing, and consider before sharing.

Donate To The Red Cross Belgium

The Belgian Red Cross has vowed to help victims of the Brussels attack  and, according to their website, they have already dispatched ambulances and volunteers to the area.

Donate Money Or Services To Victim Aid Organizations, Like Foundation For Peace

Foundation For Peace is a self-described victim support organization:

That is to say that conflict is inevitable, but using violence is not...we do not take sides, we are not aligned to any conflict, we are not faith or political based and we do not pursue causes such as justice or truth.

Instead, they focus on one thing — and one thing only — helping victims after terrorists attacks, through therapy, counseling, and ongoing support.

The point isn't what you do, or if you "do" anything at all, the point is to remember to act humanely, to be gentle and generous, and to show compassion. To be empathetic and tolerant of fellow women and men.