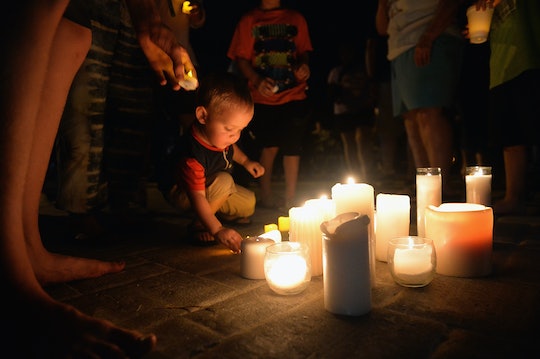 Seventeen people died and several passengers were injured after a duck boat capsized during a thunderstorm in Missouri on Thursday. Thirty one people were on the boat when it capsized, meaning more than half the individuals onboard died in the accident. After the tragic event, there are ways to help the victims of the Missouri duck boat accident, if you're looking for a way to extend your support in the wake of the devastating news.

More than 30 people were on a Ride the Ducks boat in the Ozarks when strong winds from a storm caused it to capsize, according to Stone County Sheriff Doug Rader and People. Emergency crews responded to the incident shortly after 7 p.m., according to a KY3 press conference, and at the time of the press conference, there were only eight confirmed fatalities. That number grew to 17, and nine of the people who died in the duck boat tragedy were from the same family, according to The Washington Post.

Now, members of the community and people who want to help from far and wide are finding ways to help the victims of the Missouri duck boat accident, according to the Springfield News-Leader, a local newspaper of the city of Springfield, Missouri which covers the Ozarks and the area where the tragedy occured.

Romper's request for comment from Ripley Entertainment, which reportedly owns Ride the Ducks, was not immediately returned.

We are deeply saddened by the tragic accident that occurred at Ride The Ducks Branson. This incident has deeply affected all of us. Words cannot convey how profoundly our hearts are breaking. We will continue to do all we can to assist the families who were involved.

The statement continued, "The safety of our guests and employees is our number one priority. Ride the Ducks will be closed for business while we support the investigation, and to allow time to grieve for the families and the community. Thank you for your support, and we ask that your thoughts and prayers be with the families during this time."

Tia Coleman, one of the survivors of the accident, lost nine members of her family that day, according to Fox 29. They went to Branson for a vacation seven hours away from their hometown of Indianapolis, according to Fox 29, and now, so many of them won't be making the trip back home. Coleman's husband and all of her three children died in the tragedy, according to The Washington Post. Only Coleman and her 13-year-old nephew, Donovan, survived.

Multiple GoFundMe accounts have already been set up to support the Coleman family, according to The Springfield News-Leader. As of midday Sunday, one account, titled "Only Official Duck Boat Survivors," had raised nearly $300,000 of its $500,000 goal. A spokeswoman for GoFundMe told the News-Leader in an email that the money would go directly to Tia Coleman.

The Branson/Lakes Area Chamber of Commerce and CVB also established a GoFundMe to help the families of the victims. According to the description for the campaign, the Skaggs Foundation in Branson will collect the money and distribute it to the families. You can find that fundraiser for the duck boat accident victims here.

The Community Foundation of the Ozarks is also accepting donations to help victims and their families, The Springfield News-Leader reported. The foundation's donation page can be found here, and people who want to help the victims of the tragic duck boat accident can choose "Branson Area Disaster Relief Fund" from a drop-down menu of gift designation options.

The accident is obviously extremely tragic, and there's some question of whether it could have been prevented. Coleman told reporters that everyone on the boat was instructed to stay seated, and that they were allegedly told they didn’t need the life jackets that were on the vessel, according to The Washington Post.

However, even if the passengers had all been wearing those life jackets, the two biggest mass casualties in water involving duck boats over the past 20 years happened with boats that had overhead canopies, and at least one survivor said the duck boat in question reportedly had a canopy that was on and the windows were sealed, according to The Kansas City Star.

The outlet reported that the National Transportation Safety Board has said those canopies are a risk to passengers trying to get out of a sinking vessel. Additionally, the Chicago Tribune reported that a private inspector also warned that the design makes it harder to escape, should the boat sink. Even if all the passengers had life jackets on, that's no guarantee that they could have escaped the boat when it went under.

There will undoubtedly be a lot of questions about whether this tragedy could have been prevented in the coming days and what can be done in the future to ensure tourists' safety. But for now, anyone looking to help the families that were affected have some options that will hopefully make coping with the aftermath just a little less challenging.