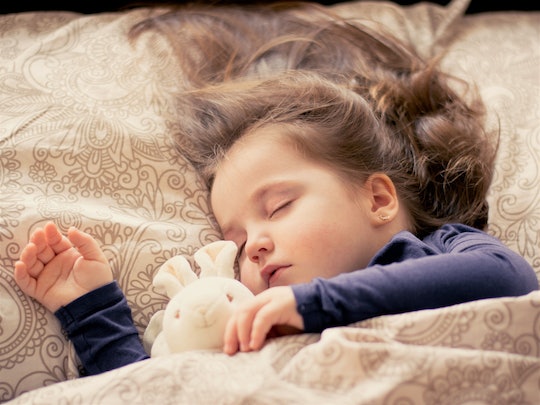 How To Help Your Toddler Sleep Through The Night

When babies become toddlers, it's a time of major transitions. For a lot of families, one of these transitions is moving your toddler out of a crib and into their own little bed. Sometimes, though, this move results in tiny feet entering your bedroom in the middle of the night with requests for water and extra snuggles. If your toddler isn't sleeping through the night, chances are you may not be either, so it's really for everyone's benefit that you figure out how to help your toddler sleep through the night.

According to The Baby Sleep Site, there can be many possible reasons as to why your child isn't sleeping through the night. Though you might think it's because they're just being stubborn (and you might be partially right), growth spurts, teething, major changes, and illnesses are all reasons why your little one just won't sleep. It makes sense, right? You probably don't sleep as well when you're sick or otherwise in pain, and you've likely had a sleepless night or two before a big move or while contemplating a job offer.

Putting an end to disrupted sleep that's followed by exhausted mornings may ultimately be less complicated than you think. In an interview with Parenting, psychologist Dr. Jodi Mindell said that it's important to consider why young toddlers can't put themselves back to sleep after waking up. Looking at his room through your toddler's middle-of-the-night eyes is one method that can help you make any changes necessary to facilitate self-soothing next time he wakes up in the middle of the night. According to Parenting, this might mean turning on a night light sooner or making sure you leave the room before he's fast asleep.

Additionally, as Susan Zafarlotfi, clinical director of the Institute for Sleep and Wake Disorders at the Hackensack University Medical Center in New Jersey, told WebMD, if you're confident that there's no medical reason for why your toddler is waking up, push bedtime back by 15 or 20 minutes so that he's more tired when you lay him down. Delaying bedtime can be a difficult balance between trying to make sure he's tired and ready for sleep, but not overtired, as that can exacerbate sleep difficulties. But according to Zafarlotfi, a short delay can help.

Rewards charts may also help. In an interview with Today's Parent, Valerie Kirk, medical director of the Pediatric Sleep Service at Alberta Children's Hospital, said that because toddlers do well with positive reinforcement, a sticker chart might keep your child in bed. Just make sure you only give out stickers when they really deserve them, because otherwise you're not really encouraging the habit. Also, while going along with a few of your toddler's bedtime requests is OK, the aforementioned article from Parenting noted that you should set a limit to the number you'll indulge and stick to it. Similarly, as Mindell recommended, let them know that you'll be back to check on them in a certain amount of time — and then follow through. They will notice if you promise you'll check on them and never do.

Sleep difficulties can be just that — difficult (extremely so). Addressing any difficulties in their toddler years, however, will hopefully keep them from persisting long after. Although it make take a few tries, a little time, and a whole lot of patience to work, soon your toddler will sleep through the night and the whole family will wake up more rested as a result.