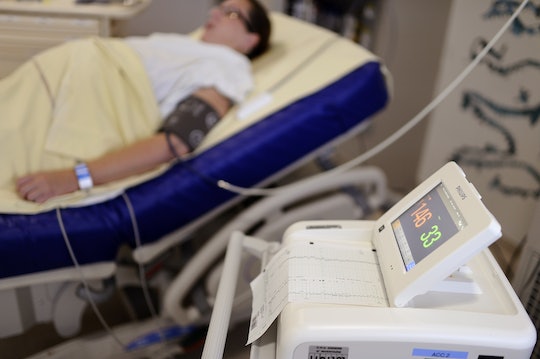 How To Induce Labor At 38 Weeks, Because You May Be Ready At That Point

Old wives' tales are resplendent with remedies for women who are done with being pregnant and want their baby out ASAP. But when it comes to how to induce labor at 38 weeks, your best bet is to steer clear of home remedies or anything recommended on a pregnancy message board. Rather, you should stay in constant touch with your doctor or midwife, who ultimately will make the call on what to do.

According to Fit Pregnancy, only five percent of babies are born on their due date. That's because, as reported by Mayo Clinic, your due date is only an educated guess of when your baby is going to arrive. This is especially true for first-time moms, women who don't know the exact date of the start of their last period, or if overdue pregnancies run in your family, according to the same article on Mayo Clinic. Additionally, the site reported that boys tend to linger longer in the womb than girls, so if you're having a boy, you have a higher chance of giving birth at 38 weeks or longer.

At 38 weeks, your stomach is probably unbearably heavy (the most common description of the feeling is likening the baby inside to a bowling ball). The pressure the baby puts on your cervix, according to Fit Pregnancy, adds to your discomfort in the front, along with backaches in the rear.

And all the hormones and fluids your body is retaining are making you swollen and irritable. Adding to the physical discomfort is the mental anguish of waiting. Hello, anxiety. While anxiety during early stages of pregnancy has been suggested to have adverse effects on a developing fetus, as noted by a Harvard Medical School study and the Massachusetts General Hospital Center for Women's Mental Health, Baby Center noted that by the time you're at 38 weeks, the baby's organs are developed and weighs an average 6.8 pounds. In other words, the bun is cooked. So the anxiety of waiting is affecting mom-to-be the most, and you might be tempted to induce labor.

In a separate article, OB-GYN Jonathan Schaffir told Fit Pregnancy that women who want to induce labor often do things without letting their physician or midwife know. These things, he said, include nipple stimulation, sex, ingesting castor oil, and exercise. Acupuncture and herbal remedies are also common things women at 38 weeks do to induce labor. However, according to Schaffir, there's no real evidence that any of these remedies work, and he cautions women against doing things behind your health practitioner's back. "The safest and healthiest labor is one that starts spontaneously," Schaffir said. So, although you want to induce labor, unless under a physician's care, where an induction is planned, you are better off spending your energy on relieving your anxiety and finding new ways to stay patient.

More Like This
What Foods Fight Nausea During Pregnancy?
OB-GYNs Explain The Connection Between Stress & Miscarriage
Diastasis Recti Exercises You Can Do At Home To Heal Your Abdomen
22 Valentine's Day Pregnancy Announcement Ideas Sweeter Than Candy
What Parents Are Talking About — Delivered Straight To Your Inbox