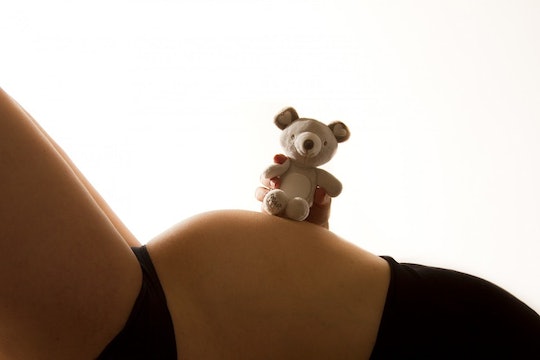 How To Induce Labor Naturally, Because You're So Over Pregnancy

Due dates are like an evil mind game. Even though they are only an approximation and not 100 percent accurate, once you make it to the end of your third trimester, you cling to that date like a hair on soap. The baby shows no signs of making an appearance in the near future, so you decide maybe it's time to take matters into your own hands and figure out how to induce labor naturally. You might have heard through the grapevine how certain at-home remedies may be able to give your baby the nudge it needs to make it's way into the world. But how do you know the difference between an old wives' tale and what really works?

As with any medical condition, you'll want to check with your health care provider before mixing up potions to drink while standing on one foot. Talking to your doctor or midwife about which at home induction methods are actually safe and effective is the first step in trying to move that bun out of the oven. According to Fit Pregnancy magazine, up until the last weeks of your pregnancy, your baby is continuing to develop, which is why most doctors recommend holding out until 39 weeks before trying any induction methods on your own.

Once you're in the safety zone, you have a few options for natural labor induction to try out. Although there is still no method that has been proven successful for every woman, all these ideas are safe and worth a shot if you just can't take being pregnant for one more day.

Walking and approved exercises can help move your baby into position and ready to deliver. According to the website for What To Expect, walking is a great way to start labor process rolling. It works like a chain reaction: walking let's gravity do it's thing and draw the baby low into your pelvis, which sets your uterus up for labor. To create the same effect, The Bump also suggested some exercises that prime the body for labor. If you're ready to meet your baby, try doing deep squats several times a day or practicing gentle hip circles on a pilates ball. All this movement can help prep your body to push out your baby.

Your Grandma may have told you how her and her friends used to drink certain things to induce labor back in their day. As it turns out, Grandma and her squad were onto something. One of the most popular potions is castor oil, which comes with mixed reviews. As Very Well reported, some mothers and practitioners swear castor oil encourages labor, while others feel it's not a safe choice for pregnant women due to side effects such as diarrhea and vomiting.

If you just can't stomach the idea of a spoon full of castor oil, you may want to take some spices for a spin. Spicy foods are thought to jumpstart labor because they're believed to stimulate contractions. But according to Parenting magazine, "while food that taxes your digestive system could lead to irregular uterine contractions, it's more likely to cause heartburn than labor." So what I'm hearing is that there is a chance, albeit a small one.

Want some ideas for induction that don't involve breaking a sweat or eating something pungent? You might want to try stimulating your body into labor. As Healthline pointed out, there are six major acupressure points connected to inducing labor. Applying pressure to certain spots on your hands, feet, and back could be the secret to starting contractions. Usually accompanied by a massage, this method can feel nice and relaxing at the very least.

To get the oxytocin flowing, try a little nipple stimulation to set those contractions in motion. According to Mayo Clinic, once the hormone oxytocin is released, it can stimulate uterine contractions. This can be achieved with a light breast massage and gentle squeezing.

Hanging in there during those last few days before the baby comes can be hard, but make sure you are choosing safe and doctor approved methods if you decide to try and push your labor along. Most natural ways to induce labor pose little to no threat for you or your baby, and even though it's not certain to work for everyone, you just might be the exception who goes into labor after eating jalapeño poppers while doing squats and squeezing her nipples. And in that case, it will all have been worth it.