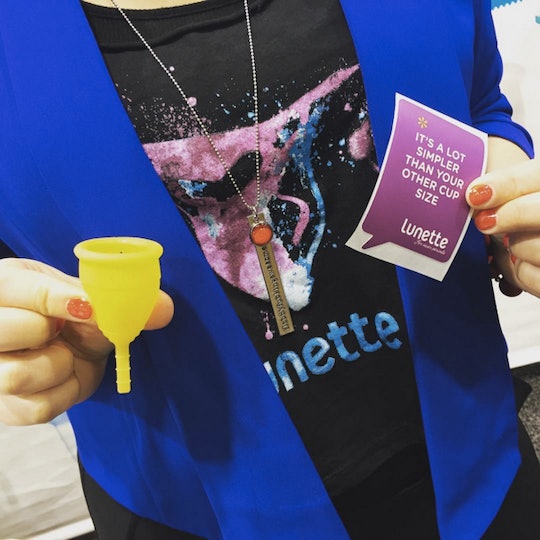 How To Insert A Menstrual Cup In 2 Easy Steps

Menstrual cups are becoming more mainstream, and with good reason: they’re safe, effective methods of period management that are more environmentally friendly than disposable pads or tampons. But first-time users, or even those who have given it a shot a time or two, may be intimidated by the specifics of using a cup. Knowing how to insert a menstrual cup is a pretty important component of the whole cup-wearing process, and it can mean the difference between becoming a full-on convert or going back to pads. And if you’re curious about the cup, chances are you don’t want to return to those other methods any time soon.

There are several methods of folding the cups for insertion, and it may take a little trial and error before you find a technique that works best for you. Everything from the cup’s brand to the unique shape of your own body can influence which insertion technique will be the one that works for you. But take heart: most women can successfully use the cup after a couple of trial cycles, so you don’t need to feel discouraged if it doesn’t seem to work right away. In no time you’ll know more folding techniques than an origami master.

There are almost as many folding techniques as there are cup brands. The DivaCup advises a "U Fold," in which you fold the cup in half, or a "Push Down" in which you bend the cup into a triangular shape, making the top rim much smaller. The Ruby Cup advises similar techniques with the "C-Fold," in which you squeeze the sides of the cup together, or the "Punch Down," which also creates a smaller triangular shape for easier insertion. There is also the "Seven Fold," which means you fold down one half of the cup so that it forms a "7" shape, as demonstrated in this helpful video from Gladrags. If these sound complicated in theory, just know that they make a lot more sense when you're reading along and experimenting with the cup in your hand.

Inserting a cup is a lot like inserting a tampon, with one notable exception: it sits lower in your body than a tampon, as The Diamond Cup site explains. In fact, you want it as low as possible while still remaining completely inside your vagina. When it opens, you may need to twist it around a little to adjust and ensure you have a good suction, because the suction is what will help prevent any leaks.