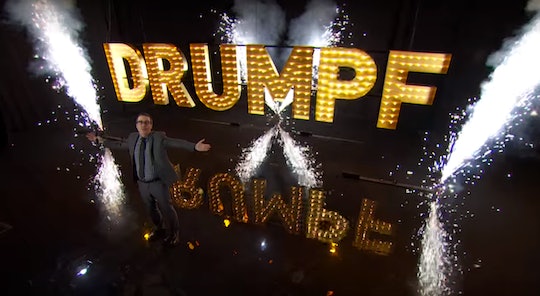 How To Install The Donald Drumpf Web Browser Extension, Because It's Too Great

Meet Donald Drumpf. He's "a litigious serial liar with a string of broken business ventures," according to John Oliver. He's also about to blow up your News Feed. In a Last Week Tonight segment that's already amassed well over a million views, Oliver revealed that Trump's historic family surname is actually Drumpf; it was changed to Trump many years ago. The real estate mogul may think the name's a thing of the past, but Oliver is dredging up Drumpf. Now, you can use it to replace every mention of Trump online. Wondering how to install the Donald Drumpf web browser extension? Here's how.

To take the formal route, go to donaldjdrumf.com and click the button that says, "Get your Drumpfinator Chrome extension." You'll end up on the Drumpfinator page of the Chrome Web Store. Click "Add to Chrome," choose "Add Extension," and you're done! From now on, the extension will swap "Trump" for "Drumpf" anywhere you read about the billionaire on the Internet.

Sure, Drumpf may sound funny. As Oliver says, "It's the sound of a bottle of store brand root beer falling off the shelf in a gas station minimart." But Oliver thinks Drumpf is much more than fodder for jokes:

So if you are thinking of voting for Donald Trump, the charismatic guy promising to 'Make America Great Again,' stop and take a moment to imagine how you would feel if you just met a guy named Donald Drumpf: a litigious serial liar with a string of broken business ventures and the support of a former Klan leader who he can't decide whether or not to condemn. Would you think he would make a good president, or is the spell now somewhat broken?

The browser extension separates Trump the brand from Trump the man, making it easier to judge the candidate's words and policies separately from his public persona. Of course, the extension is not the only tool in Oliver's arsenal. Visitors to donaldjdrumpf.com can also buy "Make Donald Drumpf Again" baseball caps in red or blue for $17.50 each. Oliver also encourages fans to use #MakeDonaldDrumpfAgain to build momentum, and he finished his Last Week Tonight segment by playing a new campaign anthem while standing in front of a giant, blinking Drumpf sign that sprayed fire.

So far, Trump hasn't aimed a strongly-worded tweet at Oliver. The host, however, says he definitely expects a response. Watch the full video to understand why: