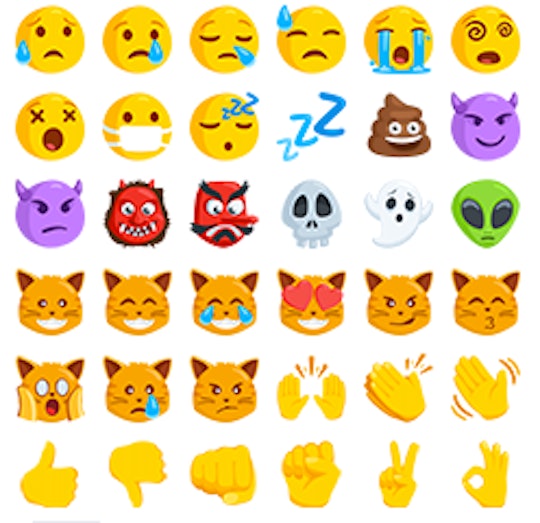 How To Install The Old Emoji Messenger For Facebook, Because Some Of The Emoji Are Creepy

Earlier this month, Facebook rolled out 1,500 (yes, 1,500!) new emojis. According to Facebook, the new emoticons better represent Facebook’s global user base, not to mention these emojis give users more than 1,000 new — and diverse — ways to express themselves. But not everyone likes the new emoticons; in fact, many Facebook users want the old emojis back, not because they want to get rid of the diversity, but just because they find some of the new emoji creepy. But how do you install the old Facebook messenger emojis? Is it even possible?

The good news is that, according to iDigitalTimes, you can revert back to the old Facebook emoticons as long as you are on a mobile device and are using the Facebook "Messenger" app. To do this, follow the below instructions:

Boom! Your emoticons and emojis are back to normal. (Well, they've just returned to their original form.)

Unfortunately, as the time iDigitalTimes wrote in its tutorial, these steps did not work for Android users — and since I am a Mac girl, I cannot confirm if this is or is not still a problem. (Sorry, Android users!) But why did Facebook change its emoticons to begin with? According to a Facebook post the company issued the day these emojis were released, the decision was one of consistency:

Emojis have changed the way we talk to each other. It’s a fun, easy way to express yourself when words just aren't enough...in fact, nearly 10% of mobile sends in Messenger include emojis. However, not all platforms have kept up with emoji standards as they've evolved...nor are they living up to the gender and skin tone diversity that we see in our world every day. Messenger is addressing emoji woes by rolling out a new set of standardized emojis so you can be sure you're sending the right message. No matter what emoji you pick, it will now look the same for all Messenger users, regardless if the recipient is on Android, iOS or another platform.

And standardization is great. (Truly it is.) However, change is hard and not only do many users miss the familiarity they found in the old “faces,” several users have complained the new images are ugly and downright horrifying. I mean, I understand; just check out the second face — or any of the images with the open mouth smile.

Of course, most users probably do not care — or simply hadn't noticed. But for those who are bothered by the change, fear not: you can revert your Facebook messenger to the old emojis in just four easy steps.