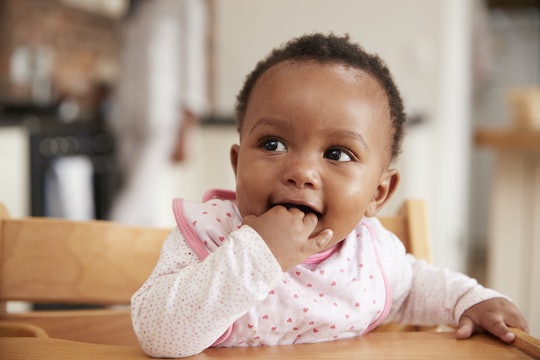 Here's How To Introduce Rice Cereal To Your Baby

Your baby is looking at you like you hung the moon. After all, you just got done feeding them. A burp and a cuddle, and now you're a rockstar. But as much as they love their bottles, they seem ready for more, so now you're wondering how to introduce rice cereal. The cans are right beside the formula for a reason, right? Is it time?

Every baby is different — some don't want much to do with solids until they're past 6 months old and some seem ready a bit younger. However, the American Academy of Pediatrics (AAP) noted that you should not start solids until your baby has doubled their birth weight and can sit unassisted, which is around 4 months.

Even if you think your baby is ready for solids before 4 months old, the Mayo Clinic noted that they aren't. Apparently several studies found that introducing solids too early can contribute to everything from aspiration pneumonia (pneumonia caused by aspirating a foreign liquid into the lungs, in this case due to immature muscles) to obesity later in life.

Traditionally, according to the AAP, single grain cereals are first to be introduced to baby, although, there's no clinical evidence that proves it's the best first food for your baby. It should also be noted that, according to the University of Rochester Medical Center, brown rice cereal is easy to digest, provides a great source of iron for your developing baby, and because it's often mixed with formula or breast milk, it's familiar in flavor for your baby. I remember my son thought rice cereal was the bees' knees, but my daughter thought it was the devil's dandruff. Kids are weird, picky little creatures. My daughter wanted all avocado all the time, and now hates the green gift from the heavens. Weird.

There is also some concern that rice cereal can be high in arsenic, according to the University of Rochester Medical Center, and that high amounts of the heavy metal can increase their lifetime risk of cancer. Thankfully, the FDA keeps abreast of the best cereals with the least amount of the unavoidable metal, and has proposed lowering the levels of arsenic allowed. (It's naturally occurring. It's everywhere.)

If rice cereal seems like a fit for your little one, you'll need to know how to introduce it. The AAP suggested that you find a formula with 2 to 5 grams of fiber and less than 12 grams of sugar per serving. And according to the Mayo Clinic, when you first begin to feed your baby rice cereal, you should mix it with formula or breast milk until it's a bit runny. (Think of a not set pudding.) Also, go back and forth between just formula or breast milk, then a few bites of cereal, and then back to the boob or bottle. (I did this without pumping much first. Oh the mess. I suggest having a pumped bottle if you breastfeed, or all the washcloths.) The Mayo Clinic also noted that your baby may experience a bit of constipation at first from these solids, and you may have to give them a bit of prune juice, or whatever your pediatrician recommends.

The website for Dr. Sears suggested that you should try new foods with your baby first thing in the morning, but keep the initial feedings in the evening, so that your baby is still getting the hang of it, but they're also nice and full come bedtime. A baby only needs a few servings of solids a day, but they should always be at the table with you because they will mimic your habits and should see you making good choices.

The most important bit of advice, according to the Dr. Sears website, is that your baby will generally let you know how they feel about this solid food business — you should take your cues from them and talk to your pediatrician first. My advice? Buy more laundry detergent, floor cleaner, and lots of bibs — or feed your baby while they're naked like I did. It's a messy, fun business, but more will end up in their hair and on you than in their tummies in the beginning.