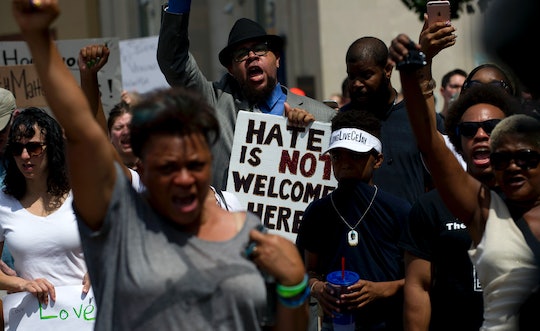 The outbreak of violence at the Unite the Right rally in Charlottesville, Virginia earlier this month has had a ripple effect of counter-protests. One such response is in the form of a march from Charlottesville to Washington D.C. on Monday. Here's how to support the march to confront white supremacy for those unable to attend.

Activists plan to march for 10 days and cover over 100 miles from Charlottesville to Washington D.C. in an attempt to address the issue of white supremacy, bring about justice and equality, and demand that President Donald Trump be removed from office for his role in the ongoing tensions across the country. "The March to Confront White Supremacy" website warns participants to come prepared for the long distance and time commitment:

This will be a sustained civil disobedience campaign, so bring what you need to stay.

Unfortunately, not all those invested in the cause have the freedom or ability to head to Virginia for a week and a half. Anyone wishing to contribute to the march or show their support can donate to the march fund via youcaring.com, a site for "compassionate crowdfunding." The goal for the fundraiser is $100,000, but at the time of this report total donations had only reached roughly $18,000. The site also urges the public to share the cause on Facebook and Twitter because "every share can raise $37." It has already been shared hundreds of times. Donors also have the option of purchasing a benefit t-shirt for the march.

The March to Confront White Supremacy is the result of cooperation between a number of activist groups. According to its official website, partners include groups such as the Women’s March, Working Families Party, the Action Group Network, United We Dream, Color of Change, and many more.

Hundreds of protestors gathered in Charlottesville earlier this month over the planned removal of a statue of Confederate General Robert E. Lee. The rally turned violent when a man, allegedly associated with white nationalist groups, killed one woman and injured numerous other people by running his car into a crowd of counter-protestors. Public outrage increased when President Trump responded to the attack by blaming "many sides" rather than condemning outright the actions of those at fault.

Protests are a powerful and necessary part of a free society. By exercising the right to gather and speak out, activists are showing that nothing less than equality will be tolerated. For those who march, I wish you luck and fortitude. For those unable to do so, rest assured that your donations and social media shares are contributing to the greater movement.