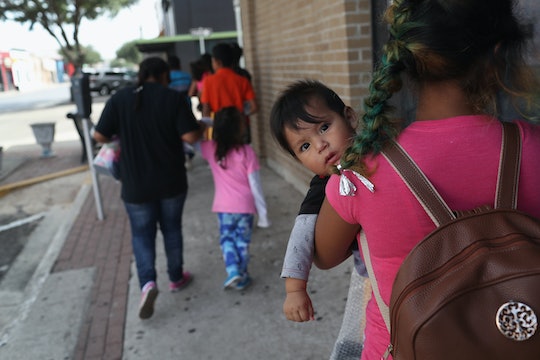 How To Keep Fighting For Immigrant Families, Because Things Are Far From Resolved

On June 20, President Donald Trump signed an executive order to stop the separation of undocumented families seeking asylum in the United States. Over the past few days, the nation watched with abject horror as children as young as a few months old were detained in cage-like governmental holding spaces as their parents were prosecuted on misdemeanor accounts. Political leaders, public figures, national and international organizations alike all called for the separations to end, and within days, the order was reversed. However, here's more information on how to keep fighting for immigrant families, because despite the small victory, the battle is far from over.

CNN reported that President Donald Trump finally listened to the rally cries of everyone from the President of the American Academy of Pediatrics to the United Nation's high commissioner for Human Rights to his own wife, saying: "We're signing an executive order. I consider it to be a very important executive order. It's about keeping families together, while at the same time being sure we have a very powerful, very strong border." He reiterated that despite his administration's strong stance on illegal immigration, "maintaining family unity" was also of the utmost importance, and that he was committed to keeping families together "where appropriate and consistent with law and available resources."

As civil as that may sound, it doesn't mean that the issue is resolved. NPR reported that of the 2,342 children who were detained since early May, not all have been reunited with their parents. Even if they were, more families and children will face obstacles and consequences in trying to find freedom and safety in the United States. Here is how you can help.

The Change.org petition currently has just under 400,000 signatures, and your signature would affirm that you support the idea that taking children away from their parents is inhumane, particularly when those families are trying to escape dangerous or otherwise war-torn countries. The petition's statement reads:

The Trump Administration recently began implementing a new “zero tolerance” prosecution policy that has separated hundreds of immigrant children, including infants and toddlers, from their parents upon arriving at the border. These families are often fleeing horrific violence, and parents are doing everything they can to protect their children by coming to the United States. Taking these children from their parents is inhumane, unnecessary, and unacceptable.

Find out who represents you in the House of Representatives and call them through the listed contact information, or through (202) 224-3121, which is the direct line to the U.S. Capitol. An operator there can help connect you to the correct department. Once you're in contact with your respective congressperson, demand that action be taken to help families seeking asylum. Supportkind.org suggests that you request for your congressperson be active in supporting the following pieces of legislation:

3. Donate To The Florence Project, A Nonprofit That Offers Free Legal Services To Undocumented Immigrants

The Florence Project is a 501(c)(3) nonprofit legal service organization. It provides free legal support, council, and representation to men, women, and unaccompanied children in immigration custody. On its website, it explains that the government does not offer council to defend individuals who aren't citizens, therefore, the majority of those in custody go without representation due to lack of funds. You can give money through the organization's donation page.

Although the government assists indigent criminal defendants and civil litigants through public defenders and legal aid attorneys, it does not provide attorneys for people in immigration removal proceedings. As a result, an estimated 86 percent of the detained people go unrepresented due to poverty.

With so many noble and worthwhile organizations to choose from, it can be tricky to determine what most needs your monetary support. If you aren't sure where you want to donate, consider ActBlue, an umbrella organization that is funding and supporting the following groups, all of whom are working to help immigrant families and children at the border as well as fight for immigration reform.

5. Stay Vocal On Social Media & Active Within Your Community

If nothing else, share important information with friends and family through your social media accounts. A huge part of contributing to the resistance is simply continuing to be active within it, and not letting any part of this become "normal." It might not seem like you can make any impact, but simply being willing to get out, protest, and share important ideas with those closest to you can have a heavier influence than you might realize. Don't underestimate the power than any given one of us can wield.